On 26 and 27 November the farmers of the European Milk Board will be demonstrating outside the European Parliament in Brussels. They are calling on every dairy farmer to take part and actively support their common aim – flexible supply management to achieve cost-covering farm-gate prices. 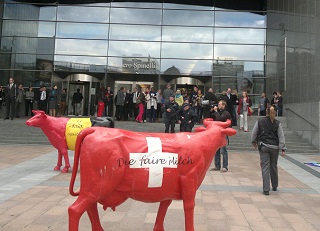 Dairy farmers are invited to bring their tractors to the protest which is planned to coincide with key meetings in Brussels of the European Parliament (26/27 Nov.) and the EU Council of Ministers (28/29 Nov.), which will be deliberating and deciding on the reform of the EU Common Market Organisation.

This includes the concept of voluntary supply constraint. In the last vote in Brussels on the abolition of the milk quota, those in favour scraped a victory with just 18 votes to 17.  The organisers have stated this shows they have a realistic chance.

The programme is as follows:

In the second installment of our farm income and diary crisis debate, Silvia Däberitz, managing director of the European Milk Board (EMB) tells us about how a Market Responsibility Programme could work. […]