On Saturday November 10th, 2000 citizens and farmers descended on the German city of Hannover, the regional capital of Lower Saxony, to send a clear message to German politicians that will be casting their final vote of the reform of the CAP in the European Parliament on 23 – 24 January 2013. 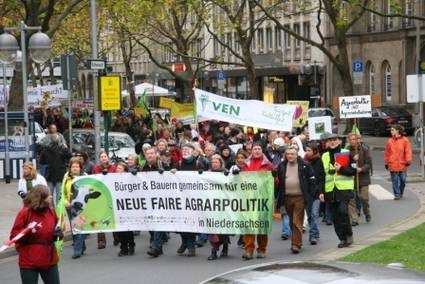 Under the slogan: “Wir haben es satt” (We’ve had enough) a broad alliance of interests – agricultural, environmental, beekeeping, animal welfare, consumer, and developments organizations – joined together for the demonstration to demand greener and fairer food and farming in the EU. The demonstrators were accompanied by tractors, as well as samba groups.

Georg Janssen from Lüneburg, national director of the AbL said “We expect the new state government of Lower Saxony to address the agricultural problems we are facing. We want a policy framework that supports animal-friendly, GM-free, high quality food production in solidarity with the environment and small farmers across the world.”

The German groups called on the new regional government not to be influenced by agro-industrial profit, particularly in light of the economic crisis. They warned that such an approach reduces farmers to mere suppliers of cheap raw material contracts and poor quality food.

The demonstration can be seen as a warm up to a larger, international demonstration that will take place on January 19th in Berlin.  In January 2013, agricultural ministers from all EU Member States will gather in Berlin for International Green Week. They will be joined by EU Agriculture Commissioner Dacian Ciolos. Providing a perfect opportunity to get the attention of many key representatives in charge of the reform, the international demonstration will be taking place at a crucial moment in the reform: just a few days before the EU Parliament’s Agriculture Committee will have the final vote on CAP reform, and the final stages of negotiations begin.

See more photos from the event in Hannover here: http://www.wir-haben-es-satt.de/start/hannover/presse/pressefotos/

How does a rural community plan for the future when it is literally living below sea level? In this excerpt from the book “Rural Europe on the Move: A travel guide to transitions”, Hannes Lorenzen shares the story of his home island of Pellworm on Germany’s North Frisian coast, where the community has come together in the face of climate change, rising sea levels, and other threats to its survival. […]

How can farming organisations and environmental organisations have real conversations with each other – where everyone listens, and difficult issues grappled with respectfully? Where everyone comes away with a better understanding of other people’s positions? There are in-situ meetings, and then there is the Landcare process. Oliver Moore has more.
[…]

‘Coalition of the unwilling’

Interview on the CAP with member of opposition party in Germany […]