A massive email campaign and complaints submitted by two animal protection NGOs – Animal Cross and L214A – have forced a controversial pig farm in Seyssel, situated in the Haute-Savoie region in France, to cease its activities. 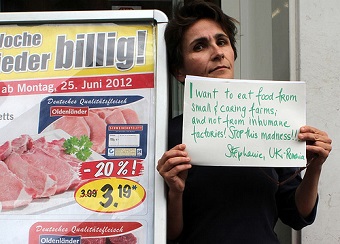 After an initial inspection in August 2012 French inspectors first classified the farm housing 300 pigs as a site of major non-compliance (rating D). However, the farm owner was not forced to remedy the situation and the animals continued to be fattened under illegal and inhumane conditions.

Animal Cross and L214A subsequently submitted a formal complaint to the prefecture, requesting for the authorities to suspend the owner’s license.  According to the NGOs, the farm was a dilapidated and dirty dark building; with the pigs wading in their excrements and their eyes reddened by the ammonia. Maggots were crawling on the ground.  (Click here for images and here for a film).

Their complaint was accompanied by an email action alert asking French citizens to request the prefecture to suspend the owner’s license. It was taken over by several French campaign and action groups, resulting in 25,000 signatures.

Seven months after its initial inspection, the Prefecture responsible for Seyssel today announced that the pig farmer was forced to cease his activities. French veterinary services had made ​​successive controls requesting an immediate remedy of the inhumane conditions. As the farmer did not respond to these calls, the prefecture now ordered the cessation of his activities.

After the recent suggestion that there should be a tax levied on GHG emissions from agriculture, will a proposal to tax nitrogen fertilizers be next? Stuart Miekle outlines the pros and cons. […]

The Sustainable Food Consortium is a collective of local people working to make the food transition a reality in the territory of Redon, Brittany. It began as an attempt to recreate the atmosphere of a popular farming festival. One of its co-founders, slow food cook Xavier Hamon, tells us about the journey so far, and shares his latest fair local food project – an on-farm restaurant. Part 2 of a conversation with Valérie Geslin. […]