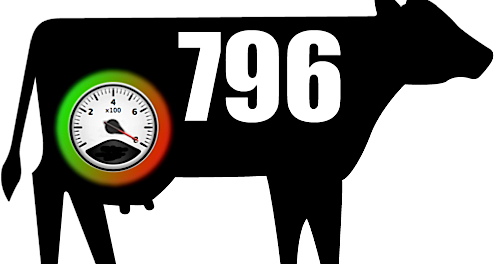 French regional authorities this week confirmed that 796 milking cows are being kept on a factory farm that is only authorised to keep 500. The owner of the Mille Vaches unit in the Somme valley, Michel Ramery, has been ordered to remove the 296 illegally-housed animals and faces prosecution for the overstocking incident.
The inspection by the préfecture was carried out following disturbing allegations of maltreatment. Pictures of cows with their hindquarters caked with faeces surfaced in the French press this week. Although authorised for 500 milking cows, there are reports that the management bought a 300-strong herd of cows in anticipation of an application to raise the herd numbers to 800 milking cows. The team from the préfecture’s Direction Départementale de la Protection des Populations (DDPP) visited the site in response to the testimony of a whistleblower and former employee at the plant, who tracked the herd size from the milking parlour.
Journalists from Reporterre.net subsequently contacted the owner: Ramery  confirmed there were probably “about 700 cows on the site.” The self-made millionaire builders’ merchant strongly denies claims of animal cruelty and unduly high mortality, blaming stock losses on animals’ failure to adapt to new accommodation.
Staffing levels are reported to have plummeted from over 30 in the spring to about 15 now, while stock numbers have risen from less than 500 to over 700 milking animals plus dry cows, calves and heifers. Allowing for shift working, this means that there are more than 100 cows per member of staff on the site at any time.
The whistleblower recounted how staff are concentrated around the 60-place rotary milking parlour and are discouraged from taking any action over lame animals or hoof rot. There are also claims that the cleaning of stalls is carried out once a fortnight instead of every other day.
The DDPP initial statement found fault with muck management in one of the enclosures and on the passageway to the milking parlour but reports that the team did not encounter maltreatment or cruelty during the visit.
The story has emerged just a week ahead of an appeal hearing for nine members of the Confédération Paysanne (la Conf’) who are challenging the disproportionately heavy sentences handed down for protest actions before the factory farm received its first animals. National spokesman Laurent Pinatel faces a suspended five-month prison sentence for symbolic but harmless actions to warn the general public of the hazards associated with this style of animal management.

In a glaring failure for checks and balances, a leaked European Commission audit concludes that Czech Prime Minister Andrej Babiš continues to profit from his business empire. The billionaire premier is in conflict of interest under both Czech and EU law, say the EC auditors. The EU seems set on making an example of the Czech PM. Will this mean a clampdown on corruption in Central Europe? […]