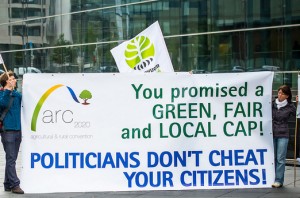 The deal struck today amongst negotiators of EU governments, the EU Commission and the European Parliament on the Common Agricultural Policy (CAP) betrays initial ambitions and hopes of “public money for public goods” and a greener and fairer CAP, Civil Society Platform ARC2020 announced today. “There is plenty of business as usual with some improvements but no real change”, deplored ARC2020 spokesperson Samuel Féret. “To see substantial greening in the final deal, you need a magnifying glass”. Most of the social and environmental improvements remain only as options national governments can take or leave.

Almost all of the contentious points on the agenda have been finally resolved by leaving them as options to the discretion of the member states. These include support for small farmers, topping up of payments for the first hectares and degressive large payments, the shifting of up to 25% of funds between direct payments and targeted programs (first and second pillar) and allowing for private income insurance schemes to be subsidized out of an already reduced second pillar at the expense of programs to promote organic and other agro-ecological practices as well as innovative, community lead rural development measures.

While the initial concept of requiring additional “greening measures” for 30% of the direct payments has formally been upheld, it’s content has been reduced step by step from an already weak starting point. 5 percent instead of 7 percent of crop land (not pasture) shall be designated as “ecological focus area”. However the vast number of exemptions and allowances for “equivalent measures” may lead to less than 60% of the crop land being actually affected by this provision. Requirement of minimal, so called crop diversification instead of real crop rotation still allows for an increase rather than a reduction of monocultures. Reducing the number of environmental laws to be observed in order to get full direct payments (cross compliance) may even lead to decreased ecological performance in some areas.

“The preferred and convenient way of reaching agreement has been a massive De-Europeanisation of the CAP”, said Féret: “Leaving key decisions on the spending to member states allows for all kind of flexibilities and favors to national lobbies at the expense of common goals, standards and rules for public goods. However, without these the European Market will inevitably reward competition for social and environmental dumping instead of improved performance. Leaving the use of EU public money at the discretion of national governments and their interests will undermine the legitimacy of the European Union and its Common Agricultural Policy. Today’s message appears to be: ‘Yes we can! … but we don’t dare to’ ”.

Finally, all EU institutions continue to steadfastly ignore the global impact of the CAP on the food and hunger situation as well as the environment. The export of environmental problems by importing cheap commodities from overseas is still promoted. Unfair competition of EU products with those of small farmers in Africa and Asia is still fostered. Not even a mechanism to monitor such impacts has been agreed, nor the final and long demanded eradication of export subsidies.

Despite disappointment ARC2020 call upon its members and partners to make the best of the available options when it comes to national implementation of the CAP According to Féret “the struggle is not over but shifts to national level now. There is still plenty to win or lose for small farmers, rural development, agro-ecology and the environment. Providing these options is probably the best this CAP reform can offer.”

Other reactions to the CAP deal on our dedicated page

CAP | Poland: What Options for Small and Organic Producers?

As a major agricultural nation in the east, Poland has a significant interest in how CAP will unfold in the current reform process. We have commissioned journalist Hans Wetzels to get to grips with CAP and Poland. Here we introduce part four, which focuses on smaller producers and how they cope with (or without) CAP supports. […]