People following this weekend’s Eurovision finals may get a biofuels-driven Thunderclap mega-tweet if enough activists sign on. The Enough Food IF campaign is recruiting 180,000 Twitter followers for Saturday evening’s broadcast. 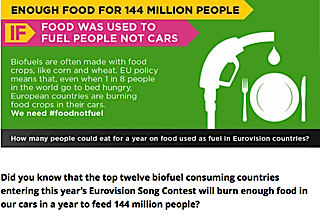 If enough people sign on, Thunderclap will tweet the supporters’ message that biofuels used in Eurovision countries consume the equivalent of enough food for 144 million people for a year.

The Eurovision finals offer a rare opportunity to reach an audience across Europe with a message that reframes popular notions of food and farming.

The Enough Food IF campaign recently organised this event that was addressed by UN Special Rapporteur on the Right to Food.

The factory farm system used by global agribusiness firms is a major source of the greenhouse gas methane. Ben Lilliston and Shefali Sharma of the Institute for Agriculture and Trade Policy (IATP) highlight that the push for appropriate regulation of factory farms’ methane emissions in the U.S. should coincide with EU efforts to regulate these emissions. […]