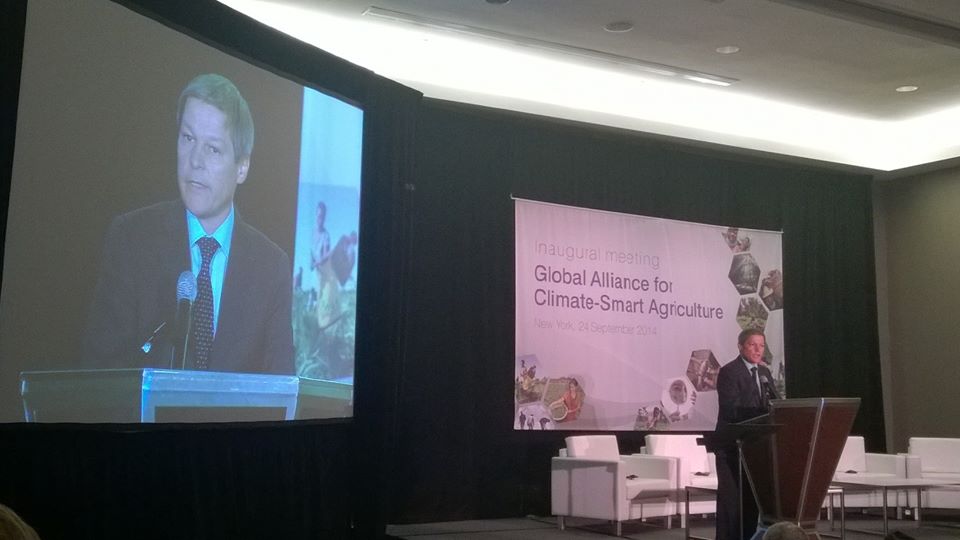 There is a new acronym in town – CSA, and it is creating confusion. No, it doesn’t have anything to do with community supported agriculture and short food chains, not even with Agroecology itself. It has a lot to do on the other hand, with monocultures, “new” technologies and agribusiness.  Attila Szocs of EcoRuralis outlines some concern.

The new sensation in town calls itself “Climate Smart Agriculture”.

The conceiving of this approach goes back to 2010, at the time of “The Hague Conference on Agriculture, Food Security and Climate Change”, delivering one key message: agriculture in developing countries must undergo a significant transformation in order to meet the related challenges of food security and climate change.

The United Nation’s Food and Agriculture Organization (FAO), initiator and promoter of the concept envisioned it as an approach to develop the technical, policy and investment conditions to achieve food security under climate change. Big emphasis on the “food security” here…as this is not about “food sovereignty” at all.

According to the FAO “as population is on the rise food consumption patterns are destined to follow the same upward trend. Food production will need to increase by at least 70 percent to meet the demands of this growing population by 2050. Studies show that climate change is likely to reduce food productivity, its production stability and incomes in some areas that already have high levels of food insecurity”. Thus, climate-smart agriculture would come to promote production systems that sustainably increase productivity, resilience (adaptation), reduces/removes GHGs (mitigation), and enhances achievement of national food security and development goals.

Things are moving fast. The Global Alliance for Climate-Smart Agriculture was just officially formed a few days ago including more than 20 governments, 30 organizations and corporations (many of them with activities resulting in hard social impacts on farmers and communities, such as those driving land grabbing or promoting genetically modified seeds), including Fortune 500 companies like Yara (the world’s largest fertilizer manufacturer), Syngenta, McDonald’s, Walmart and Kelloggs, and is out hunting for more partners from research institutions and civil society organizations to corporate actors. Even Secretary-General Ban Ki-moon gave his blessing to the Global Alliance, stating that “I am glad to see action that will increase agricultural productivity, build resilience for farmers and reduce carbon emissions.”

Dacian Ciolos (pictured), Commissioner for agriculture and rural development of the EU also spoke at at the ongoing UN Climate Summit from New York, explaining how climate change has been made a cross-cutting priority throughout the development of the Common Agricultural Policy.

On the other hand, hundreds of civil society representatives and peasant organizations read between the “climate smart” lines since the beginning. Participating the above mentioned Hague Conference, IFOAM (International Federation of Organic Agriculture Movements) brought up valid concerns that “international policies in their focus on carbon will incentivize business-as-usual industrial agriculture resulting in biodiversity loss, increased GHG emissions and even greater food insecurity in the developing world.”

The International Peasant Movement Via Campesina also highlights in their recent position that “climate smart agriculture begins with a deception by not making a differentiation between the negative effects of industrialized agriculture and the real solutions offered by traditional sustainable peasant agriculture which has contributed to alleviating poverty, hunger and remediation of climate change”, pointing out the fact that the agricultural activity that has most contributed to greenhouse gas emissions has been industrial agriculture, not smallholder sustainable agriculture.

In addition, climate smart agriculture, like the Reduction for Emission on Deforestation and Forest Degradation (REDD), will expand the carbon market and its use for financial speculation. The possibility of big profits with investments in carbon credits generated from farmlands involved in climate smart agriculture projects will increase speculation in the carbon market, leading to further carbon land grabs by large-scale investors and producers, and the further displacement of peasant and smallholder farmers, just as REDD displaces indigenous people (like these people in Africa).

This is already happening in Eastern Europe. Corporate social responsibility projects like the one of Carbon Global Solution‘s “The Clear Plate” are already promoting climate smart agriculture showing off 155,000 hectares of farmland in Northern Hungary and the Transdanubian region.

In Eastern Europe governments are already leasing wide areas of land traditionally used by peasant farmers to multinational companies to be used for industrial agriculture or for carbon credit speculations. The fear is that the process will accelerate if the soil itself becomes a carbon commodity. Making soil carbon a tradable asset could increase speculation in land.

Turning peasant’s fields into carbon banks, rights which can be sold on the carbon market, will only lead us further away from food sovereignty. Agribusiness is well positioned to profit from these, and some developing country governments hope that offering their forests, grasslands and farmland to polluters in the North could earn them revenue. This is politically unjust. The developing world should not be responsible for the emissions of developed countries, and definitely should not sacrifice their farmer’s sovereignty, health, and resilience. Organizations like GRAIN’s research has shown that a sustained focus on peasant-based agroecological practices oriented toward restoring organic matter to soils could capture 24-30% of the current global annual greenhouse gas emissions.

As Pat Mooney from ETC Group has put it: “Climate smart agriculture has become the new slogan for the agricultural research establishment and the corporate sector to position themselves as the solution to the food and climate crisis. For the world’s small farmers, there is nothing smart about this. It is just another way to push corporate controlled technologies into their fields and rob them of their land.”

We do not need to reinvent the wheel. The responses and solutions to climate change lie in those technologies and practices that increase the climate resilience of systems. Many of the practices that reduce greenhouse gas emissions also increase the resilience of agricultural systems and increase the water-holding capacity of soils: practices which increase diversity within the system; practices which build the humus content of soils through use of organic fertilizers and cover cropping. Rather than to smartly look for new tricks, it would be better to consistently look back and simply around to established habits of agroecology practitioners, the peasant and organic farmers that make up the backbone of our societies – the very people who feed the vast majority of those fed on the planet already, despite receiving hardly any of the subsidies compared to agri-business.

See this comprehensive outlining of the proven benefits of agroecology by our US sister organisation the Institute for Agriculture and Trade Policy ( IATP).

Imagine there was a soil amendment that could be produced from waste biomass and could do the following: draw down carbon, increase soil fertility in acidic soils, increase yield and productivity – especially for the poorest farmers with the worst soil, reduce nutrient run off, improve water retention in soil, while also protecting against soil borne diseases? Say hello to biochar…. […]