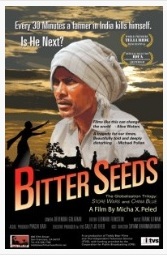 Every thirty minutes, a debt-laden Indian peasant farmer gives up the unequal struggle with the broken promises of capital-intensive high tech agriculture and commits suicide. The 2011 film Bitter Seeds presents these issues in context and is the third of Micha X Peled’s globalization trilogy of films after Store wars: When Wal-Mart Comes to Town and China Blue.

The trilogy tracks the consumer economy upstream from cotton clothing in a US hypermarket to a Chinese denim factory, before focussing on Indian cotton farmers in Bitter Seeds.

The final film catches the predicament of a peasant farmer once able to grow crops of cotton from local seed varieties, forsaking traditional seed for high tech packages, requiring growing conditions and management that is simply not available to the peasants buying the product. Even if the hapless victim tries to return to local seed varieties, these can no longer be bought for love nor money.

Bitter Seeds will be screened in Brussels on May 2 as part of the International Documentary Film Festival. The screening takes place after a one-day conference chaired by UN Special reporter on the right to food, Olivier de Schutter. The conference, The New Laws of the Food Market, will cover the current dynamics of the food market; the working conditions of independent farmers, as well as international food programmes and local initiatives for food security. Full details here.

Ireland’s Maynooth University hosted the 2018 Festival of Food Sovereignty mid-April. The intention was to connect activists, scholars, practitioners and social movements from around the world interested in creating a food system rooted in principles of justice, ethical production and consumption, sustainability and democracy. […]

US urges UK to stay in EU

Ahead of Cameron speech […]

This week the second Balkan Rural Parliament took place in Ohrid, North Macedonia. Organised by the Balkan Rural Development Network, the Balkan Rural Parliament gives a voice to rural communities in the making of rural development policy for the Western Balkans. For EU accession countries, rural development is a key driver to accelerate the process of EU integration. The Parliament highlighted the need to strengthen mutual trust on every level between people and national institutions, as well as between the Western Balkans and the EU to build equal partnerships, writes Aleksandra Todorovska. […]