Here we present part one of two articles by Sebastian Lakner on the background and current developments in the CAP reform process.  A version of these articles were originally published in German on Lakner’s blog

In recent months, the debate on the CAP reform has picked up some speed: We are heading towards the elections of the European Parliament (EP) on 23-26 May 2019 and meanwhile, we are in the midst of the CAP-reform process for the next funding period 2021-2027.

In the following post I will describe how far the deliberations in the Council and Parliament have progressed and which positions we can identify in the different institutions, institutions that will finally decide on the reform. There is a huge range of options: an ambitious reform in the CAP, with substantial progress for the environment is possible. So too is  to a business-as-usual-reform including all the inefficient and outdated instruments of the CAP like the distortive coupled payments, arbitrary market measures, overly complex and ineffective agri-environment programs, underpinned by a de facto income policy via direct payments. These payments take about 60% of the agricultural budget, which still lacks a clear justification. All this is at stake and yes the current CAP might also largely stay in place, unless the main actors work together bravely to re-invent the CAP as a modern policy for farmers and citizens

How far has the reform process progressed?

On 1 June 2018, the EU Commission presented its proposal for the CAP reform post 2020, since then the proposal has been repeatedly discussed in the Council of Ministers and the European Parliament. On 14 February 2019, the Environment Committee of the European Parliament (COM ENVI) agreed on a position on the CAP reform. A week later, on 19 February, the EP’s Agriculture Committee (COM AGRI) decided to postpone the EPs plenary vote on after the election in 23-26 May. A common position in the Agriculture Committee is expected to be adopted on April 2, 2019.

EP Agriculture Committee decided today to vote on the new CAP only in committee and that’s a good thing! This will not make a preliminary decision

The citizens then have the opportunity during the European elections to vote on whether they want a greener agricultural policy!

The Council of Ministers has also been working intensively on the legislative proposals of the Commission since the summer of 2018 (23 group meetings, 6 meetings) and the Council will continue working over the summer 2019, so that a first common position can expected be expected for the coming months. The following figure simplifies the various steps in the reform process, a more detailed description can be found on the NABU GAP ticker on 9.1.2019. 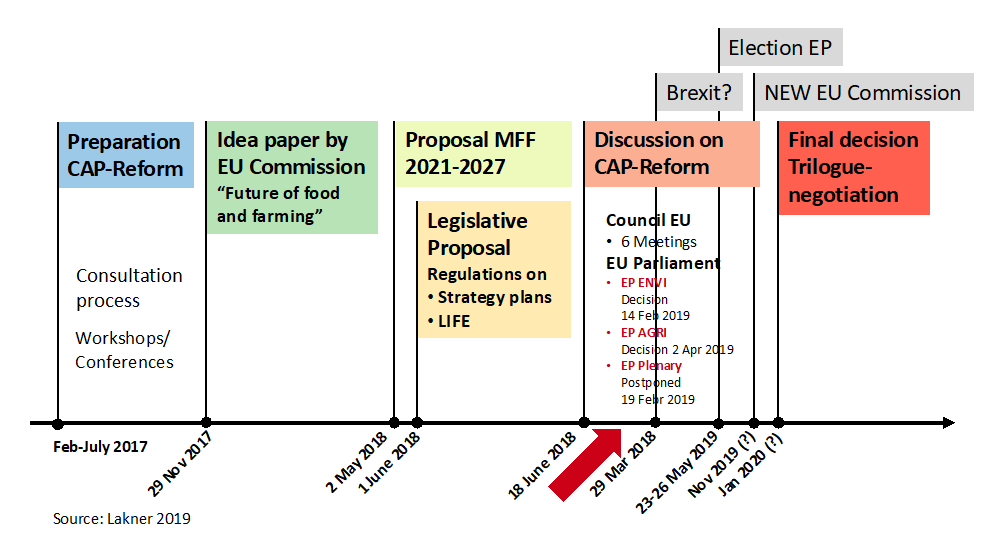 How is the reform process going?

Brexit is currently overshadowing many debates, as the UK’s withdrawal is ongoing and has taken many turns., including even participation in the European Parliament (EP) elections. The date of these elections 23-26 May 2019 – ends the work of the current parliament de facto in April. The new parliament will be constituted after the election, on July 1, 2019.

In the second half of the year, the Member States (based on the EP’s election results) will nominate a new Commission and its President; the Commission has to pass the hearing of candidates by the parliament and will approved (or rejected) before the end of the year. Both processes will halt the process of CAP reform, with only the Council continuing to exchange views. The EP (unlike other parliaments like e.g. the German Bundestag) can continue the work and for example accept suggested amendments of the previous Parliament, so that less time is lost. At the earliest, with the confirmation of the new EU Commission (possibly in November 2019), the negotiations on the CAP reform can restart in late 2019, so that a final negotiation and decision can be expected in the course of the year 2020.

One main argument, which was brought up by some members of the AGRI committee, is that the financial budgets (MFF 2021-2027) are not yet fixed. Usually, the budget is decided in the European Council and indeed, the final decision is not yet taken. However, it is the question, to what this argument is reliable or whether this is about tactics and the AGRI committee and the EP wants to keep the CAP-topic out of the election campaign.

In the next post, the positions of actors involved in the process will be outlined.

Organic farming and agri-environmental schemes will not grow under current Rural Development plans . […]

What’s happening to the small farmers below the payments threshold in the UK? […]