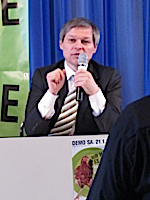 When there were just six, twelve or even fifteen member states in the European Union, agricultural policy was formulated in a more centralised way, according to European Agricultural Commissioner Dacian Cioloş. He told a conference organised by German platform Meine Landwirtschaft and ARC at the start of Green Week in Berlin: “People come to Brussels for answers to agricultural problems, but how can I find a single solution that will suit 27 member states?”

The European Commission provides the CAP as a toolbox for policy development, Cioloş explained: there is a degree of flexibility in the way these shared tools can be applied. What is needed is broader debate among a wider public than just those with a professional interest in business as usual.

The will to assist with appropriate policy is as strong as ever, but a wider involvement of a broader public in the political debate will be needed for real change to take place, Cioloş explained. Expectations of the extent or rate of change that can be achieved also needed to be moderated, he warned.

Likening the CAP to an elephant, he argued that it takes small but frequent incentives to make it respond and change direction. The process is gradual, he suggested, and takes time.

Appearances can be deceptive, however, and as delegates dispersed, it was observed that elephants (unlike political processes) are capable of greater agility than is sometimes attributed to them.

The European Commission is in the middle of developing a new Organic Regulation. What’s the process, and what does the organic movement think? […]