Brussels, 20 April 2012 –  Two years ago, when Commissioner Cioloş launched his consultation on the future CAP, the responses showed widespread support for small farms. The conference in July 2010 confirmed this support. It also showed that farmers feel disadvantaged in the food chain, vis-à-vis the food processors and retailers. Short food chains were advocated as one way to tackle that disadvantage. 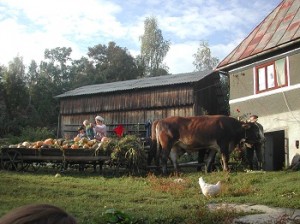 Commissioner Cioloş got these messages. Proposals for the future CAP, published last year, include support for small farms, including flat-rate payments, and for short food chains. However, debates in the European Parliament and European Council show little support for these themes, and strong vested interests oppose spending CAP money on them.

Of the roughly 14 million farms in the EU, about 10 million may be defined as small: about 6 million are very small, 1 ha or less. Together, all the small farms produce perhaps 10% by volume of all food grown in Europe. But the conference agreed that small farms have high significance in many regions. They are homes for between 20 and 30 million people. They produce significant volumes of food. They are the main element in many local economies. They manage land, and can keep it in good heart for long-term food security. They maintain ecosystems and landscapes of European significance.

These benefits are public goods, and they justify giving small farms a specific focus in EU policy. The present policy has some such focus, but barriers may prevent small farmers from benefitting. Some governments wish to rationalise farm structures, at the cost of small farms: others treat small farms as “below the radar” of support programmes, because of high transaction costs. Some small farmers cannot pay their share of investments, or secure credit from banks.

The conference urged the Commissioner to review the application of relevant policies by Member States and the factors which prevent small farmers from using the CAP. Looking ahead to the future CAP, there were calls to raise the ceiling for flat-rate payments to €1500, reduce monitoring costs, cut the paperwork for small farmers and  strengthen farm advice systems.

The conference endorsed the benefits offered by short food chains and local food systems. They can serve the rising demand among consumers for fresh, healthy food. They can reduce food miles, save energy and fossil fuels, and help to combat climate change. They can help farmers to gain a higher share of the final food price, and can generate local employment in processing, retail and tourism.

However, those who promote short food chains face difficulties, notably the impact of EU hygiene regulations. Commissioner Dalli and his Director Bernard Van Goethem described the wide degree of flexibility which Member States could use in implementing these regulations. But delegates complained that some governments do not use or publicise this flexibility, so that small food-chain enterprises are faced with heavy costs. Also, the rules of public procurement are often interpreted in ways which fail to reflect the benefits of fresh local food or short food chains.

So, a more focused policy is needed in order to realise the strong benefits offered by short food chains. The aim should be to strengthen technical advisory system, provide credit, encourage cooperation between farmers, and between them and others in the food chain, and to flex regulations and public procurement processes to reflect the benefits of short food chains. A package of measures should focus on promotion of short food chains and local food systems, with higher than normal co-financing from the EU.

In these ways, small farms and short food chains, which were at the core of Europe’s life in the past, can become a vital part of the future of European agriculture.

Heard (of) Farmerama? Amplifying the voice of the smaller farmer

A positive globe trot to the places where smaller farmers of an ecological mind are tending to their land. Farmerama takes you there. Have a listen. […]

EU Commissioners for Agriculture, past and present, talk to viEUws about their experiences of CAP reform […]