Update (02.04.2014): Today, the European Commission released a press release that stated the following :  “As far as the production of nitrogen-fixing crops on EFA is concerned, the Commission has decided to adjust the coefficient in the Annex – in time for implementation of the reform in 2015 – such that 1 hectare of a nitrogen-fixing crop such as alfalfa, clover or lupins  can be equivalent to 0.7 ha of EFA (rather than 0.3 ha in the original text) in order to make the option more attractive.” 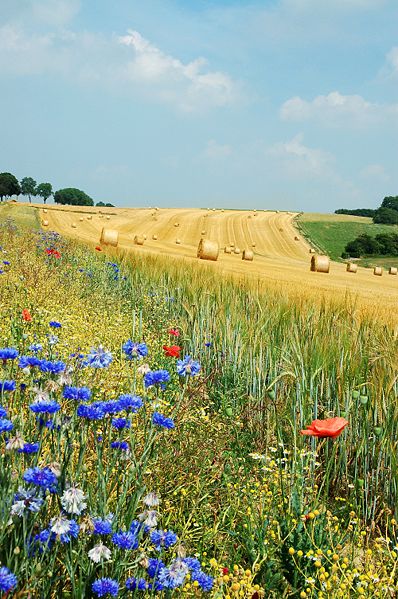 In current discussions in the European Parliament, it seems that following extensive pressure from the European People’s Party (EPP), led by Albert Dess MEP, aided and abetted by the COPA-COGECA agri-business lobby, it looks like yet another greening capitulation is on the cards: The weighting factor for protein crops in Ecological Focus Areas (EFAs) may be adjusted.

The rules for what features can be counted as EFAs are weighted from 0.3 to 2: the lower figure (up until now set for nitrogen fixing crops, catch crops, green cover, short rotation coppice) was in effect set to act as a disincentive, while the higher figure recognised the biodiversity and ecosystem value of genuinely beneficial features such as trees in lines, hedges and ditches.

Despite the fact that it is April Fool’s Day, it’s no joke if these crops may have their weighing moved upwards. The wide gap in weighting was considered a modest achievement in the Delegated Acts: now, the EPP are taking credit for further complicating CAP reform – what they call “flexibility” – and further destroying greening:

”I have been assured by the European Commission that the weighting factor for protein plants and multi-annual energy crops will be corrected substantially” Albert Dess MEP said in a release from the EPP, aptly dated April 1st.

Certainly indications are that, at the very least, the Commission will be open to revising the weighting upwards in the near future if EFA rules are seen to discourage protein crops.

Sometimes the densest of micro debate can effect huge change across large swathes of rural Europe. And so it is with CAP, greening and EFAs – Ecological Focus Areas. Whether or not pesticides and fertilisers are used in these areas, and how different features and potential uses are valued (weighted) will define how these areas can function ecologically, in terms of pollination, pest regulation, water absorption, nutrient cycling, soil formation, etc. This in turn will determine much – will nature get to begin to recuperate? Will production and fertility get onto a stable footing through the strengthening of “ecosystem services”, providing resilience to the erratic floods and droughts of climate change?

Right now, the final phase of CAP reform is dealing with the Delegated Acts. The College of Commissioners on the 11th and 12th March approved 10 Delegated Acts of the Common Agricultural Policy (CAP), which still needs to be approved/rejected by European Parliament and Council. The Commission (as executive) writes these Acts: Delegated Acts supplement the already-agreed Basic Acts. They are supposed to be uncontroversial, and not make fundamental alterations to what has already been agreed at Basic Act level. However Greening and what are called Ecological Focus Areas (EFAs) has proven to be especially contentious.

The Parliament and Council (co-decision makers) have the right to oppose the acts during two or, if requested, four months from that March 11/12 date.

Member State representatives will be in talks with Commission officials on these 10 Delegated Acts this week. Meanwhile the Parliament’s agriculture committee (ComAgri) will vote on April 7th on whether or not to support the position of the agriculture committee. An absolute majority of all 766 MEPs is needed, i.e. at least 384 votes, if Delegated Acts were to be rejected.

At this late stage, any reversal of the progress made towards an end point in the CAP reform process would be seen as extremely negative politically. It could also delay the implementation of post-reform changes in payment and control systems in the member state paying agencies for the 2014-2020 period, and of course the uncertainty could delay  payments to farmers, as the Parliament will be effectively out of play for the months after the upcoming European Parliament Elections at the end of May plus the summer recess.

Pesticides and nitrogen fixing crops are controversially due to be permitted in EFAs. There are some weak restrictions: e.g. the nitrogen-fixing crops that the Member State considers must supposedly contribute to the objective of improving biodiversity. ARC 2020 and many others have fought to exclude all pesticides and fertilisers from EFAs. Civil Society is not alone – It has also been reported by Agra-Facts that the Commission’s environment and climate departments were reportedly “furious, having lobbied hard to ban all pesticides and fertilisers from the EFAs”.

Already, the wording with regard to EFAs is considered very weak because there is no reference at all to pesticides, only to “production methods” and to plants “contributing to the objective of improving biodiversity”. It’s not clear at all to what extent and how the Commission will check and audit those Member States which allow  protein crops in EFAs and chose not to ban or limit pesticides during their production.

Better news had come in the weighting matrix for EFAs. What this refers to is the  value of a land use for biodiversity, but also the incentivisation of particular practices or land uses. The lower the value, the less value the feature has. With a range from 0.3 to 2 then, it is good news that short rotation coppice, catch crops/green cover and nitrogen fixing crops all remain low at 0.3 – despite efforts by countries like France and Germany (rather ludicrously, considering that catch crops and green cover are already obligatory under cross compliance rules) asking for 2. Landscape features like hedgerows, trees in lines and ditches have a weighting  factor set at 2. Other positives have weighting  factors set reasonably high too, such as agro-forestry at 1, buffer strips and ponds both at  1.5.

It is this balance between conventional cropland and land-use that supports nature and agro-ecosystem functioning that  is currently controversial for those who oppose genuine greening: the EPP and their supporters inside and outside the Parliament simply want to be able to grow crops and conventional inputs (i.e. using pesticides and fertilisers) in EFAs. In the Parliament’s deliberations, all kinds of unfounded and contradictory notions are being bandied about.

These include complaints about complexity and bureaucracy. While CAP reform was supposed to be about simplifying rules, it is in fact the case that the greening rules were simple when first  proposed. Those who have demanded adjustments and special cases for their own countries and interests now complain that the rules are now complicated. They are complicated now precisely because of the watering down of greening rules. So called “flexibility”, as Dess bragged about in the EPP release, has resulted in   more complications and more bureaucracy. The agro-industrial farm lobby is all for simplicity and harmonisation of the rules until it effects them and their very short-term bottom line: then they cry for  flexibility.

In any case, the rules to implement the CAP were already at the same  level of complexity before this reform and these Delegated Acts. Greening is not necessarily any more complicated to what existed before:  in fact most aspects of “greening”were shifted over from existing cross compliance obligations and relabelled.

The core issue in this greening debate is the failure of the business-as-usual brigade to understand that EFAs are essential to maintaining productivity in Europe: EFAs are not simply nature reserves. COPA-COGECA in a recent press release (24th March 2014) refer to Greening as, simply, “land being set-aside from production”. In fact, the EU currently faces a plateau and indeed drop-off in productivity because our agro-ecosystems are basically falling apart:  we face a pollinator deficit so our crops won’t be pollinated or yield the harvests we expect; the soil is increasingly degraded and infertile, blowing away in the wind and being washed away in floods – fertility is only propped up using increasingly costly agro-chemical inputs.

So in fact in order to maintain and increase productivity, we need to increase ecosystem functions like pollination, soil formation, carbon sequestration, nutrient and water cycling, and regulation of pests by insect predators. This can only be achieved via EFAs if they are not treated like normal agricultural land and have some restrictions on their use: e.g. if we want the EFAs to deliver pollination, there should be no pesticides applied. But they can be farmed, so it is not “taking land out of production”, but rather using land to ensure productivity.

Strong weighting is thus essential to discourage nitrogen fixing crops being declared as EFAs. Such leguminous crops belong as part of a crop rotation measure, not in EFA. Whether this current EFA weighting can be maintained will in large part define just how green or otherwise this so-called “greening” in the so-called CAP “reform” will turn out to be. However, the signs today, seem to be pointing towards yet more capitulation, watering down of the few rules and regulations left to protect biodiversity and enhance longer term sustainability.

After the #AfterCAP Debate | Where Now ?

Wrapping up this third curated debate, we in ARC2020 begin to draw elements of a road map for how the Common Agricultural Policy could evolve. The timing is perfect – the European Commission has recently launched a consultation on modernisation and simplification of the CAP. Let’s use this #AfterCAP debate as a springboard to delve deeper into Europe’s agri-food and rural policies. […]