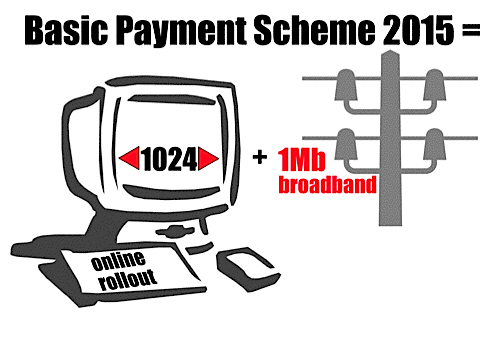 The UK government has updated its CAP implementation timeline in preparation for a 2015 roll-out. In place of the Single Payment Scheme, qualifying farms will receive a basic payment, with additional payments for greening and young farmers.

Basic payment claims will be received online for three months between mid-February and mid-May 2015. Online help will be available for basic payment scheme applications from early January onwards. Live trials for the new online interface will start in July with groups of farmers, land managers and agents.

According to a ministry leaflet DEFRA’s entry level online access requirements will not support dial-up access: the ministry specifies a minimum download speed of IMb/second. The advice given addresses the issue of measuring download speeds rather than the useable operating range of broadband connections over existing network connections: “…if you’ve got a slower connection, the service won’t work as well. There are lots of websites which can tell you what your internet connection speed is.”

The other requirements are predictable: Windows 7 and later will be supported, as well as Mac, Linux and Android operating systems. Internet Explorer version 8 and later will be supported, as will recent versions of Google Chrome, Firefox, Opera or Safari. Older systems may still work, provided the machine has an XGA monitor (Extended Graphics Array or 1024 by 768 pixels), a reliable internet connection and a modern web browser that does not struggle with interactive web2 pages.

For those who are served by distant telephone exchanges or who have yet to invest in the more costly alternatives to phoneline connections, DEFRA is vague: “We know that not everyone can get onto the internet, so we’re working hard to work out what we can do for those people who can’t.” This is followed by a promise of more information “…later this year.”

This is not quite as informative as saying that the investment in online CAP administration is driven by cutting costs and shedding jobs, particularly the staff grades that would otherwise be answering the phones.

Despite the rhetoric, this CAP is less green than the last one. Here’s why. […]