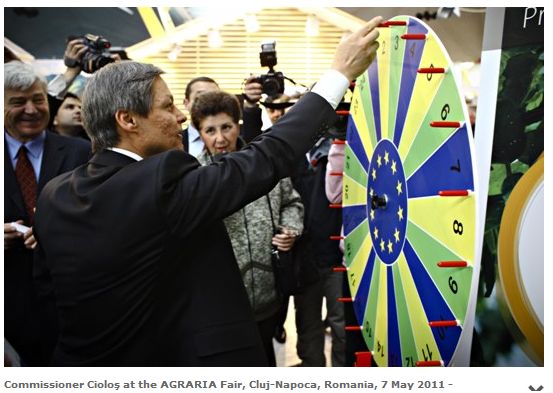 What are the pros and cons of another five years of Dacian Ciolos as Agriculture Commissioner? Ramona Duminicioiu  (Agro-biodiversity Campaign Coordinator for Eco Ruralis) explores.

Every five years, a new European Commission (consisting of 28 Commissioners – one from each EU country) is appointed. The term of the current Commission will end on the 31st of October this year.

There are many questions, expectations, hopes and fears regarding the new European Commission. The Commission is not an elected body. Given it’s vast executive role, we could consider it as the Government of the EU. Behind the scene, the political negotiations between the member states target the most influential departments, Agriculture being one of the most disputed.

The procedure starts by appointing a new President of the European Commission. The European Council nominated a candidate, the former Luxembourg Prime Minister – Jean-Claude Juncker –  which was approved by a comfortable majority (422 from 751) of the members of the European Parliament, on the 15th of July, 2014.

According to the procedure, the EU countries will nominate candidates for the constituency of the new Commission and the new elected president will choose the commissioners and their policy area. The list of commissioners will have to be submitted for approval (by qualified majority) first to the Council of Ministers, then to Parliament. If Parliament approves, the new Commission will be officially appointed by the Council.

Dacian Cioloș, the current Commissioner for Agriculture, is a horticultural engineer by training and former Romanian agriculture minister. Cioloş became EU Agriculture Commissioner in 2010, having the support of France, through the selection process. He succeeded Mariann Fischer Boel, whose ultra-liberal policies left a specific legacy for the agricultural world, not just for Europe. During his mandate, Ciolos oversaw the 2014-2020 CAP Reform – proposed by Ciolos and his team and eventually agreed upon by the Parliament and Council.

Even though the high hopes of the civil society have not been fully accomplished, “there are certainly some positive points- often non-binding for the Member States – such as coupling of direct payments – including for protein-based plants, the possibility of increased direct payments on the first hectares, and many open measures for rural development”, according to the European Coordination Via Campesina. Amongst other changes in the CAP, welcomed as positive, were the introduction of ‘greenings’ requirements, to which 30% of direct payments will be tied starting in 2015. The deal was far less ambitious than initially proposed, with many exemptions added, while some question the impact of the measures.

In Romania, the dispute between the President and Prime Minister has caused a delay in the proposal for the European Commissioner. The candidate from Romania has not been officially nominated, but it was publicly expressed that the nomination of Dacian Cioloş is a viable option, as well as keeping the same portfolio of the Agriculture agenda. Although Cioloş seems to be the most likely to be proposed, analysts do not exclude that in the last minute, the ruling party – Social Democrats PSD – could advance another nomination.

It happened in the past that the same person kept the agriculture portfolio for two consecutive terms. It was the Austrian Franz Fischler, who was the Agriculture Commissioner between 1995 and 2004.

At the end of his mandate, Cioloş still has significant capital in terms of public sympathy. It will be up to the Romanian decision-makers to push forward the process for proposing the Romanian candidate. However, Jean-Claude Juncker’s decision will weigh heavily on the future of the new Commissioner for Agriculture. According to many voices throughout Europe including Romania, Cioloş is the best available candidate. The DG Agri administrates one of the largest budgets in the EU and its decisions influence the future of millions of European farmers, the environment and consumers.

The question remains: will Dacian Cioloş be able to continue the implementation of CAP that he reformed? Or will a new politician take the lead in one of the most complex executive positions in the EU?

Our briefing notes on the CAP

Our comprehensive news section on CAP

Food Sovereignty: an idea whose time has come.