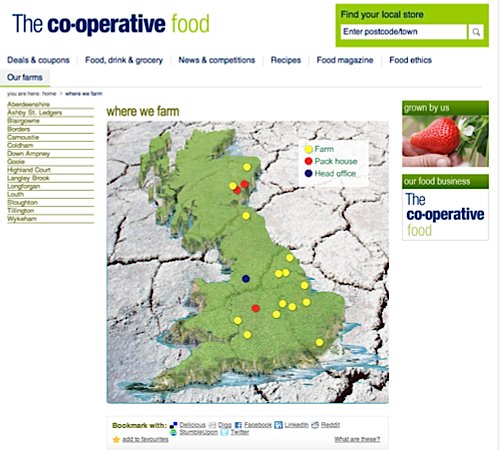 The UK’s food and farming sector is reeling with shock and disbelief as “Britain’s largest farmer”, The Cooperative, has put its farms up for sale. The Cooperative Group has actively promoted ethical food production and business practice for decades. It farms about 20,000 hectares, of which it owns roughly a third.

The fire sale was announced on February 26 and follows a GBP 1.5 billion bail-out for the Cooperative Bank, which is now just 30% owned by Cooperative Group. The group also took on substantial debt when it acquired 900 stores from the struggling Somerfield retail chain in 2007, for more than GBP 1.5 billion. This too, will be on its way home to roost by now.

In a brief statement Cooperative Group asserted that farming was “non-core.” The cooperative movement in the UK began on the basis of selling unadulterated food with honest weights in 1844. These factors alone accounted for its popularity with ordinary people, who were fed up with being sold adulterated food in short measure.

The Cooperative’s farming division managing director Richard Quinn told Farmers Weekly this week that events at the bank or elsewhere in the group were unrelated to the disposal of the farms. However, since the Cooperative Group delivers its annual results later this month, he was unable to share any relevant trading figures. He did confirm that for now the group is looking for one single buyer, though.

This week, the Cooperative Group accepted the resignation of chief executive Euan Sutherland, after less than a year in the post, which came with a package worth over GBP 3 million. Sutherland was previously chief operating officer of the Kingfisher group, which operates DIY chains like B&Q in the UK, Castorama in France or Hornbach in Germany.

His business career includes positions with corporate household names like Coca-Cola, Mars, Matalan and electrical retailer Currys. With a career in fast moving consumer goods (fmcg) behind him, Sutherland has firsthand knowledge of logistics and is used to procurement-driven businesses. He arrived at The Coop to sort out a crisis in the Cooperative Bank during the mea culpa phase of the UK retailers’ Horsegate fiasco.

Whether Sutherland had the opportunity, inclination or the time to engage with the radically different environment of the agricultural side of the business is academic. It is possible that there really is no time to explore other options. In the cut and thrust world of fmcg, farms are at the opposite end of a supply chain and there is no notion of a vertically-integrated business. What matters is that the label “non-core” was firmly attached to the farming side of the Cooperative.

The full extent of the Cooperative Group’s farming activities is like an iceberg: there is more below the waterline than appears at first sight. In 1986, the Cooperative started to undertake contract farming, to make fuller use of its existing support services. When the retail (CRS) and wholesale (CWS) sides of the Coop  merged in 2001, what used to be CWS Agriculture became Farmcare. 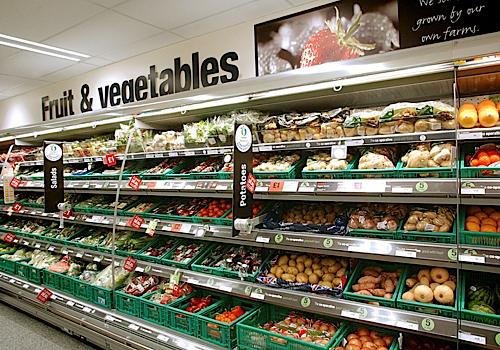 In 2003, faced with steadily declining doorstep liquid milk sales, Farmcare made a strategic withdrawal from dairying to concentrate on arable production, possibly gaining from the single payment scheme in the process. Around the same time, fruit growing was developed at the request of the retail side of the business. By 2006, the Cooperative group had bought its first packhouse for retail vegetable packing and launched its “Grown by us” brand in 2007.

Part of the problem with selling off the farms as an asset sale is that they are just part of a bigger business that extends to contract farming, some tenant farming and a range of centralised support units. The website now lists 15 estates and sites around the UK with an agent’s contact details for prospective purchasers; before the weekend two other estates were listed, where the Coop is a tenant.

Brick and mortar assets which only emerge upon closer reading of the website include a combine harvester depot for in-house and contract work, as well as central warehousing and buying for agricultural inputs. Current estimates for the likely price of the business are based on land prices and start at around GBP 150 million, although the true value is much greater.

Capital projects have been consistent with the scale of the operation: last year the Coop invested GBP 350,000 in a grain-drying facility at Goole, with a drying capacity of 44 tonnes/hour and raising onsite storage capacity to 8,400 tonnes. In 2009, the group added a further 38 hectares to its Coldham estate with the purchase of another farm for field vegetables, including the Coop’s exclusive Pioneer potato variety. In May 2010, just over 6,000 vines were planted at the Coop’s Down Ampney farm in Oxfordshire: the two-hectare vineyard will come on stream this year.

There are unconfirmed reports that the Cooperative Group is looking for one buyer to acquire the business as a job lot. However the business is such a diverse collection of holdings that a bulked-up price would inevitably undervalue parts of it to accommodate any purchaser. There is a grassroots campaign building to secure farmland for other cooperatives. With such a tectonic shift in the UK’s farmland distribution, many see a once-in-a-lifetime opportunity to secure access to land that would not otherwise materialise this side of Judgement Day.

The Cooperative represents a movement of 7 million members who may not want or be able to produce food, but who have some very distinct views of where they want their food to come from. “For many people, organic is not always an option, but GM-free food at the Coop is accessible,” GMFreeze director Liz O’Neill told ARC2020.

Other Recent Posts by Peter Crosskey

Rural Ireland on the Move – new report on Just Transition and Diversification launched.

This week ARC2020 and partner organisations release a report, and hold two events, on the topics of Just Transition and Diversification in Ireland. Targets to reduce emissions come alongside pressure for agriculture to improve its impact on biodiversity, water and air quality. Meanwhile rising feed, fertilizer and other input costs, and a sequence of recent crises – brexit, covid, and now the tragic war in Ukraine – compound the pressure. So what next for rural Ireland? […]