Former EU trade commissioner Pascal Lamy, now director general of the World Trade Organisation (WTO), last month described the EU’s agreement with 10 Latin American states over banana imports as “a historic moment.” Lamy himself has taken part in the negotiations wearing first an EU hat before his career move to the WTO: “…quite a few people who worked on the cases, both in the secretariat and in member governments have retired long ago,” he told a Geneva press conference. 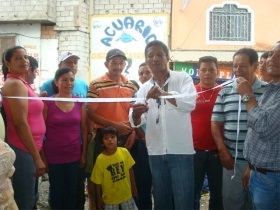 But paid retirement is no more than a dream for thousands of banana plantation workers in Latin America. They still face systematic oppression, many of them suffering violent attacks for being members of a trade union.

However, by this time employer Noboa had already sacked general secretary Lester Freire and dozens of other SITBA members on a pretext of financial problems. The company later had the gall to suggest that Freire might work for a local sub-contractor and use the skills he had gained during his 13 years employment with Noboa.

Noboa is the world’s fifth largest banana business and supplies EU retailers under the Bonita brand. Its treatment of union members is partly to blame for the low level of unionisation (1%) in the Ecuadorian work force. However, under intense international pressure, this autumn the country’s government is legislating to extend breastfeeding and childcare rights for working mothers.

These concessions to basic humanity already beg a number of serious questions. But international pressure has played a big part in bringing banana industry issues to the legislative agenda.

In the wake of a German TV documentary Der Preis der Bananen, the Ecuadorian government took the film makers to task, saying: “The country is working to ensure rigorous control of products used against the different crop diseases, and a pesticide registration body has been established.”

Bananas are one of the most heavily sprayed food crops in the world and an unconfirmed Ecuadorian proposal to outlaw spraying fungicides within 200 metres of houses and water courses would be no more than a modest start. It is common for workers to be sprayed alongside the crops they are working on.

Bananalink reports that the Ecuadorian government is to give banana firms six months in which to register plantation workers on the national social security register. But there is still a long way to for legislative measures to mean anything on the ground, which is why it is important to maintain international pressure on oppressive banana businesses.

US urges UK to stay in EU

Ahead of Cameron speech […]

The Kingdom of Bhutan is best known for its high national happiness levels, gorgeous Buddhist monasteries, untouched forests and nature protection areas. Lesser known is that fifteen years ago, the small country in the Himalayan Mountains pledged a shift to total organic food production. ARC2020’s Hannes Lorenzen reports on the innovative entrepreneurs spearheading this transition. […]