Last week (March 5 – 9, 2012), the last round of the international negotiations on land at FAO is taking place. Governments and civil society are meeting to finalise negotiations on the “Voluntary Guidelines on the Responsible Governance of Tenure of Land, Fisheries and Forests” in FAO’s Committee on World Food Security (CFS).

Despite national differences, some trends prevail throughout the continent: land concentration and decrease of the farming population, disconnection between agricultural land value and its market price, difficulty of young farmers to access land. Besides, recent evolutions – such as competition between food, fibre and energy production for land use or massive financial investments – create increased pressure for local, small-scale agriculture. At the same time, Europe is also the cradle of various civic initiatives, which are inventing new ways of owning and managing farmland and entrusting it to local, ecological farmers.

1. Can we speak of land grabbing in Europe?

In these countries, national policies, with the support of the CAP, have preferred to address the need of the agricultural sector to receive investment for modernisation and equipment by supporting corporate agriculture, rather than promoting the development of small- to medium-size farming. Investors may be national or foreign equity funds, agrofood companies or other corporations seeking to diversify their portfolio which they consider safe and lucrative. They are attracted by the favourable political context (political stability, CAP payments…) and specialise in few profitable products (e.g. cereals, agrofuels)[1]. While the land is usually rent (rather than bought), it becomes largely remote from local communities: many family farmers rent their land and abandon farming[2], only few community members are hired as waged labour, and the production is usually directed at European or world market, and inserted in long supply chains.

European agriculture has for decades been based on capital-intensity, mechanisation, specialisation, and size increase. This evolution has now reached unprecedented heights and generates destructive consequences in terms of access to land and food:

* Land concentration: farm size (apart for subsistence farming) has constantly increased in both EU-15 and EU-12. As a corollary, farm number has decreased dramatically in the long and short run[3].

* Weight of financial matters in farming: because of high investment needs, most farmers become dependent on banks or on agrofood businesses; once indebted, they are locked in specialised, intensive forms of production; increasingly, decisions regarding choices of productions are based on profitability and agrobusiness needs. As a corollary, agrofuels may develop at the expense of food production, and the growing consumers’ demand for local, sustainable, quality food may not be met.

* Young farmers’ difficulty to get land: farmland is increasingly rare and expensive[4] and represents a major burden for young farmers who have to make many simultaneous investments. While there are no comprehensive data at EU level, it seems that many young farmers – both inheriting from their families or new entrants to small/medium-scale farming – are struggling to acquire land[5]. This is a major issue at a time when a whole generation of European farmers is reaching retirement age.

* Speculation in farmland: in various European countries, in particular Eastern Europe and France, where prices are lower, farmland attracts investors which view land as a safe heaven, and agriculture as a profitable activity. Another phenomenon, prevalent all over Europe, is that (farming and non-farming) population is making considerable profit by selling agricultural land for residential and urban uses. This has fuelled farmland disappearance and price increases. 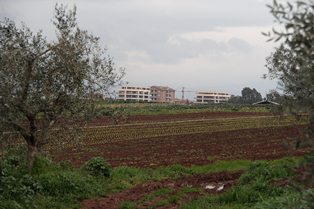 In this context, it is useful to come back to basics: agricultural land is, before anything else, the basis for food production and the reproduction of lasting ecosystems – hence, life – in the long run. Its price, availability, quality and use must reflect this primary objective. In order to achieve this goal, the land market can, and should, be regulated. It must ensure that land is used in a way that fulfils long term social needs, in terms of preservation of agricultural use of the land, local quality food production, conservation of natural resources and biodiversity, balance between urban and rural territories and populations, renewal of farming generations, landscape conservation, etc.

Over the past decade, a number of civic initiatives have emerged in (mostly Western) Europe to address one specific obstacle: the difficulty of local, ecological farmers to access land[6].

These civic initiatives on access to land operate either by acquiring land or by making agreements with landowners in order to provide land under favourable terms to local, ecological farmers. To acquire land, they raise investments or donations from the public (consumers, local inhabitants, etc.), thereby creating new forms of solidarity with farmers. To reach agreements with landowners, they have developed a range of tenancy and other conventional agreements with public and private landowners. Besides directly owning or managing land, these organisations often train and support farmers, mobilise citizens, and raise awareness about local food production and consumption, land use and planning, land stewardship and environment protection.

These organisations usually have a specific focus on sustainable forms of farming (low-carbon farming and marketing approaches, organic agriculture, agro-ecology, good land stewardship, etc.). They therefore contribute to address the European ecological crises, in terms of climate change, loss of biodiversity, and depletion of natural resources. Organisations in this movement also contribute to developing new solidarities between consumers and farmers, urban and rural, old and young. As such, they are part of the broader development of community-supported agriculture and alternative food networks. They contribute to the preservation and development of local quality food production and marketing, and to the empowerment of consumers and communities with regard to their food consumption.

While these organisations are fairly recent, and represent a marginal part of the agricultural sector in their country/ region, many have already been very successful and bear testimony to the interest and readiness of the public to get involved in favour of local sustainable food production, the protection of agricultural land and landscapes and a good balance between urban and rural areas.

Together, a number of these organisations are now seeking to highlight challenges facing farmers in gaining and securing land for local, ecological agriculture. They also promote civic and public solutions, which have been developed to address these difficulties.

[1]: For specific examples, see GRAIN http://www.grain.org/ and http://farmlandgrab.org/
[2]: In 2007, ‘big farms’ (>50 ha) had an average of 259 ha in Hungary, 403 ha in Bulgaria, 494 ha in Czech Republic, and 621 ha in Slovak Republic, and represented between 75 and 93% of the UAA. Source: Eurostat.
[3]: Between 2003 and 2007, EU-27 lost 1.3 million farms, down from 15 million farms, i.e. about 10% of its farms.
[4]: In most of Western Europe, agricultural sales land prices have reached levels which are unsustainable from an agricultural perspective. In Spain, Northern Italy or Belgium Flanders, prices of €20,000 to €30,000 are common. In Eastern Europe, prices are lower but have often exploded in recent years.
[5]: In Denmark, all farms are bought and sold from one generation to the next. Nowadays, most young farmers can get started because farms are too big, prices too high (around €25,000 per hectare on average) and banks won’t finance the needed loans. In fact, prices and acreage increases have been such that some farms have become virtually impossible to buy and sell in individual ownership.
[6]: See for instance: Terre de liens, Regionalwert AG, Land in zicht, Terre en vue…

Agroecology and its near terminological cousins are in the ether – and many organisations are asking for your feedback, or telling you about great examples from all over the world. So, what are they? […]

Where Soya has Scale – Ukraine, Big Ag and Land Concentration

The FAO expects former Soviet countries like Ukraine to play an important role in feeding the world the coming decades.  But questions remain about who will benefit from the oncoming agricultural gold rush. […]