Just a few hours after the Greek government announced a referendum over the fate of Greece’s bailout programmes, banks are shut in the country and capital controls have been set to only 60 € a day. ATM lines are growing throughout Greece, with an estimated €2bn bank run in just 48 hours. With banks to remain closed until July 7th, two days after the referendum, Greek society seems to be polarised around swift decisions that will define the fate of the country for  decades to come.

The dark clouds of uncertainty are becoming dense over European summer skies too. The Euro is shaken in the stock markets of Asia and many Italian banks failed to start trading on Monday. With projected losses on possible Greek default at €58bn for Germany, €42bn for France, €39bn for Italy and €26bn for the IMF, the European elites seem rather perplexed  -if not downright distressed – by the possibility of Greeks taking the “wrong” decision on next Sunday’s referendum.

This is not the first time this has happened. Something similar happened in 2004, with the referendum on the Euro-Constitution. Our political leaders seem to perfer decisions made behind closed doors. Greeks are not alone in feeling uncomfortable with having their affairs managed by unelected technocrats, lobbyists and ludicrously paid consultants of supranational institutions. The wide citizens’ opposition across Europe to the TTIP negotiations exemplifies this.

For six years now, EU, ECB and IMF technocrats -coupled by the press- offer not a solution but a narrative: the Greeks are in this situation because, supposedly, they are bad people. At the end of this road, Greece is being sacrificed to maintain a set of delusions that enfeebles everyone.

But this cannot be the end. It must not be! During this crisis, civil society has been building new connections and new ways. And I am sure that all true Europeans can see that what is happening in Greece,  may happen elsewhere in the near future too.

There is an agri-food context too. As I pointed out in 2012, and will reiterate now:

Despite the potential of our land, Greece now imports the majority of its food and on average we are the second most obese people in the EU. These abnormalities are largely attributable to the EU’s Common Agriculture Policy, which has supported the growth and development of a very narrow range of large-scale monocultures, almost entirely for export purposes. The failures of the CAP have had a profound effect not only on our food culture and agricultural skills, but also on the landscape of the country. In just three decades, Greece has lost most of its local agricultural varieties and almost all of its dry land, low-input agriculture was pushed out of the market. In Crete, a large number of two-thousand-year-old olive trees were turned into firewood, within a very short period of time.

With 12 percent of its population being small farmers, Greece is amongst the top ranking countries in Europe in this index.  Over the decades, the EU policy has not really grasped the actual needs of these family farmers, desolating the countryside, as it did not for most of Europe. During the crisis, here in Greece we have been fighting these structural difficulties, despite the lack of bank loans and political sense from our leaders. As the economy plunders, creativity is on the rise, spearheaded by the youth that look back to the land of their ancestors. 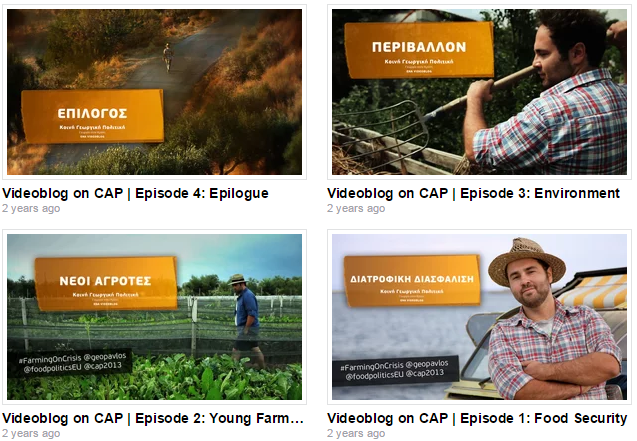 This is our “homework” for a Europe whose agriculture is in dire need of generational renewal. And there are some energetic examples, involving well educated, food aware, tech-savvy young people. Given the necessary institutional support, we could achieve a lot. But we are left alone.

The real question is: Will the European Union survive? And if yes, in what form? The answer to this question, I am afraid, is not something that will emerge in the next few days, no matter how the current deadlock will be handled. Europe must decide, or rather redefine its path for the future. Will it be one based on integration, solidarity and sovereignty, or one in which the markets and banks bully their way towards control over peoples lives? In other words, who wins? The Union’s founding principles or funding principles?

Europe is, therefore,  in a dilemma. The Union has to put an unprecedented effort to meet an unprecedented challenge. To achieve this, we need causes and conceptual frameworks that will help us citizens achieve the founding vision of European integration. This requires a new political mindset that is not about belonging to the left or the right. This new political arena has citizens and communities on one side and the corporate lobbies on the other. And we need to find common causes and common inspirations that will help us unite in practice.

It is my hypothesis that food and the land can be one such cause: restoring our broken food system is about restoring democracy.

As yuppies in the stock markets of Frankfurt, London and Paris will probably be losing sleep over the next few months, and as the political system fails to protect the European idea, it is up to us -the citizens- to get informed and act. Over this period, I will take the opportunity to share with you some thoughts, hoping to bridge the information gap about what we -the citizens- are going through in Greece. This is probably what the media and politicians will not tell you; I am afraid they are too far away from the realities at the base. My focus will be on the efforts put forward by individuals and communities who strive against endemic institutional barriers, in order to champion the ideas of agroecology, resilience and civic engagement.

Put together, in the long term all these efforts are creating solutions that are leading us to a more sustainable future, feeding back into our common European identity. In this process, we need your support, engagement and participation. Therefore, instead of a scapegoat, Greece should become the spotlight of the international discourse on sustainability.

Above all, let’s don’t be afraid, and let’s get working. All together!

Pavlos Georgadis is an ethnobiologist and food author.

He has lived in eleven countries in Europe, Asia and Africa working on research projects for biodiversity conservation, sustainable development and rural extension. With an experience from international collaborations with public and private institutions as well as the civil society, he returned to Greece in 2012. Since then, he is an active social entrepreneur in the agroecological sector, having created the single varietal extra virgin olive oil Calypso and the consultancy company We Deliver Taste.

With a focus on participatory design of resilient agrifood systems and food policy, he is consulting several institutions in Greece and the EU. He is the leader of Slow Food Thrace in Greece.

About Pavlos Georgiadis 8 Articles
Pavlos Georgadis is an ethnobiologist and food author. He graduated from the University of Edinburgh with a degree in Plant Science and an MSc in Biodiversity & Taxonomy of Plants. He holds a second MSc on Environmental Protection & Agricultural Food Production from the University of Hohenheim-Stuttgart, and is currently a PhD candidate on Social Sciences in Agriculture. He has lived in eleven countries in Europe, Asia and Africa working on research projects for biodiversity conservation, sustainable development and rural extension. With an experience from international collaborations with public and private institutions as well as the civil society, he returned to Greece in 2012. Since then, he is an active social entrepreneur in the agroecological sector, having created the single varietal extra virgin olive oil Calypso and the consultancy company We Deliver Taste. With a focus on participatory design of resilient agrifood systems and food policy, he is consulting several institutions in Greece and the EU. He is the leader of Slow Food Thrace in Greece.
Twitter

The European Rural Sustainability Gathering 2017 – social economy, cooperatives and grassroots initiatives in rural Greece – begins tomorrow. We’ll keep you updated during the event on social media – facebook and twitter – and with detailed, dedicated articles after the event. Here’s all you need to know for now. […]