Written By: Stella Beghini – Agrobiodiversity Campaign Intern for Eco Ruralis. January and February may not require hard work in the gardens but in these months all the efforts of the past year come to a result. The catalogue of seeds is finally ready! Before the first warm spring breezes, seeds will be freely distributed to passionate peasants and gardeners. The excited state of the office is palpable, the seeds in the shelves need to be packed and sent to all over the country, the phone rings and people drop in for varieties of tomatoes, cucumbers, aubergines and many more vegetables. What is all this work about? 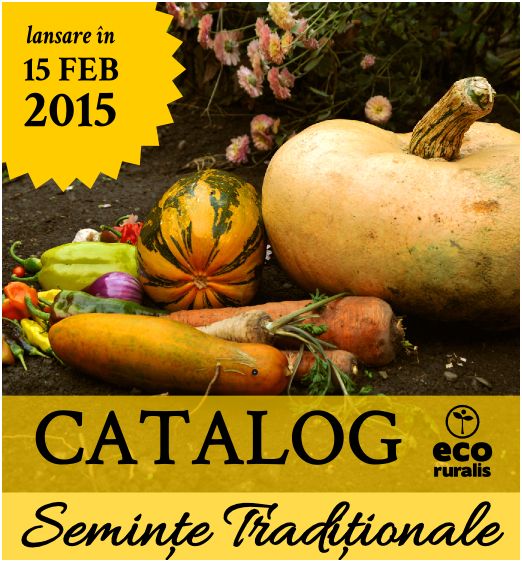 ‘Genetic enclosures’ and concentration of natural resources are defining our food system, shaping the way seeds are produced and used and how we feed ourselves. The agrobiodiversity that maintains the peasant and sustainable way of farming is being eroded by the industrial use of fewer species. Eco Ruralis propagates free and traditional seeds rich in culture and territorial heritage in order to retain the link between biodiversity, rural communities and healthy environments.

Seed sovereignty and the access of traditional varieties are at the backbone of Eco Ruralis’ strategy to keep sustaining traditional and peasant farming, in a time when multinational seed corporations hold a great power in the European seed market and agribusiness is perceived as the successful solution to bring ‘development’ to northern and southern farmers. Romania holds a special place in this context, being a country where the biotech industry receives support from the government and genetically modified seeds of maize are planted – some of them  illegally cultivated, as reported by Greenpeace Romania on GM soy.

Cultivating heirloom varieties, swapping and distributing them freely is our answer. During the last few years, Eco Ruralis’ team has developed the technical and participatory capacity to propagate traditional seeds in a university garden and another urban garden outside Cluj in order to reach communities around the country interested in keeping biodiversity alive. The help from outside has been vital: little envelopes coming from the most diverse places containing traditional varieties were being sent to us by European seed savers, national gene banks and old peasants. As well, pictures were coming along with comments on the seeds previously donated by Eco Ruralis, reinforcing the bond we have with small rural communities.

Besides this, the urgent need to study and methodologically classify the varieties instigated the participation of a team from USAMV, the local agricultural studies university: ecological and genetic studies are being made in our gardens. The scientific observations made by professors and students come along with descriptions of the adaptive quality of many traditional varieties to various environmental factors.

This year we have been able, with the help of members and volunteers, to diversify our collection of free seeds, including local varieties of beans, aromatic plants and a much wider selection of tomatoes, aubergines, peppers and cucumbers. The over 90 traditional varieties selected to be in 2015 catalogue come from every corner of Romania and several countries around the world. There are early varieties coming from Siberia, pumpkin’s seeds from Cluj and beans saved from a village in Buzau county among Mexican chilli peppers and yellow, dark and red ox-heart tomatoes. Some of these seeds took some long and amazing trips such as the tomatoes from the Carpathians to Senegal.

The catalogue contains as well some useful tips to farmers, such as intercropping cultivation with some listed plants, easy recipes, plant companions in the garden and, of course, how to save seeds.

However, even more aspects are found in this catalogue. The real challenge is to create awareness, participation and solutions to mend our broken food system. Participation of members and the general public is crucial in developing alliances and alternative food systems: building strong agricultural connections in Romania is one of our aims.

In order to protect this heritage and keep the debate fertile we will organise, all throughout the year, activities focused on education and we aim to strengthen the national network of peasant associations and civil society groups interested in these projects. Eco Ruralis is currently working to establish a larger group of “seed guardians” scattered all over Romania to help us promulgate this message and enrich the quantity and the quality of seeds to be distributed. This is going to enlarge the geographical basin, from the plains of Banat to the Carpathians mountainous valleys and collect seeds that respond to different ecosystems and human necessities.

Every year, the launching of the catalogue at the beginning of February is one of the most important steps in Eco Ruralis’ work to maintain agricultural diversity and an active farming and consumer community in the countryside as well as in the urban gardens. The listed seeds embed an amazing variety of stories, traits and they just need to be planted and sprout during the next spring in the most number of gardens as possible!

In the build up to the Forum Synergies European Rural Sustainability Gathering 17-20th May, we continue our focus on grassroots initiatives in Greece. Here, we talk to Panagiotis Sainatoudis and Vasso Kanellopoulou. The chat happened at the 17th seed festival of Peliti and the first international Olympic Seed festival in Peliti, Drama, Greece 20-22 April. […]

As the debate around genetically-modified “super crops” heats up, tried-and-tested solutions to tackling the climate crisis are in danger of being left out in the cold. Any deregulation of new GMOs threatens to undermine diverse and self-determined approaches to seed and food production that enhance biodiversity and soil health, and strengthen the resilience of entire agro-ecosystems, argues Stefanie Hundsdorfer. […]