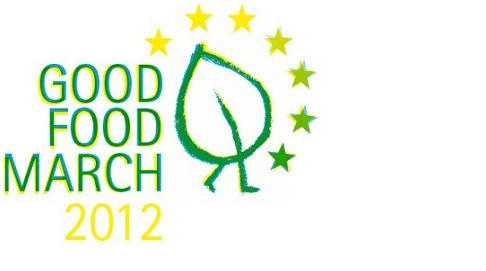 ¡Vamos a Marchar a Bruselas! (ES)

It’s time for fair prices for farmers and shoppers

Start: End of August 2012 at different locations throughout the EU

The fate of our food and our farmers is being debated in Brussels. For the first time, the reform of European agriculture will be decided by both the European Parliament and national Governments

This is our chance to demand a Common Agriculture Policy (CAP) that delivers good food and good farming. It’s time for change.

Over the past 50 years, our taxes have been used to support industrialized food production. This form of agriculture is threatening the existence of our farmers in the global North and South. It creates global food insecurity on the one hand and mountains of food waste on the other. It destroys the environment because it relies on the overuse of chemical fertilisers, harmful pesticides and fossil fuels. Factory farms depend on imported soy for animal feed. They disregard animal welfare, aggravate climate change and lead to the abandonment of rural areas. We call for a major rethink of our food and farming system. The CAP must change, let’s march for change!

This summer, farmers, citizens and young people from across Europe will march to Brussels by foot, bicycle or tractor. Along their way they will take part in events, actions and protests. We invite people to come to Brussels on 19th September 2012 to demand that the European Union delivers good food and good farming.

Let’s have a CAP that:

• Takes us to a greener and more sustainable agriculture, and promotes agro-ecological farming methods.

• Strengthens the social and economic development of rural communities.

• Guarantees the cultivation of local protein feed crops, rather than imported soy.

• Moves us towards food sovereignty.

• Rejects food speculation and ends the export of agricultural products at a price below their production cost.

Together we can make these changes happen!