The CAP SNAP photo campaign was a fundamental part of the Good Food March to Brussels in 2012. It was launched to allow anyone to send a message to EU politicians about the future of food and farming they want to see in Europe.

The idea is simple: Take a piece of A4 paper, write your message, add your name and country, find a great background…and click.

During the Good Food March over 1000 photos were collected from countries across Europe (and beyond). On 19 September 2012, the GFM Grande Finale in Brussels, the photos were presented to EU representatives responsible for the CAP reform in a book of citizen testimonials. This included EU Agriculture Commissioner – Dacian Cioloş and COMAGRI Chair – Paolo De Castro.

The photos provide a snapshot of all those who want Europe’s food and farming policy to change for better. They send a strong and unified message to the decision makers responsible for shaping and implementing Europe’s food and farming policy from 2014- 2020: The policy must protect nature, animals and people; recognise the wonderful culinary and rural traditions of all European regions; and support old, new and small-scale farmers across Europe.  After all, without them, good food and good farming is not possible.

Find all the photos collected so far here: http://www.goodfoodmarch.eu/photo-action.html

WHAT HAPPENED TO THE PHOTOS AFTER THE GOOD FOOD MARCH? 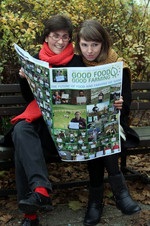 The first edition of the book was very popular with citizens and politicians alike, and quickly sold out.

ARC2020 continues to collect photos at all events. Send yours to photo@goodfoodmarch.eu today!

Wolfgang Hees, is an organic farmer and representative of the German small-scale farmers association of the region of Baden-Württemberg. He attended and spoke at the Good Food Good Farming rally in Strasbourg on Monday. Below is what he said. […]

Workshops in Wietze- not so silent before the storm

Raw campaigner Jonty’s own account of the camp, workshops and demonstration in Wietze […]