“I’m beyond angry at this remarkable decision”. So said Scottish MEP and member of the European Parliament’s Agriculture Committee, Alyn Smith, who was incandescent with rage over UK government’s trickery: “I had in my naivety taken it to be a foregone conclusion, especially after the very sensible cross party consensus at Holyrood united to fight Scotland’s corner,” he fumed. So what, exactly, has the UK government done?

Scottish farmers and parliamentarians have reacted angrily to the UK government’s decision to withold hundreds of millions of euros from Scottish agriculture that had been allocated specifically by the European Commission to level up Scotland’s historically low payment levels per hectare. Referred to as convergence uplift, the European Commission had allocated an additional EUR 60 million per year specifically for Scottish farming, worth a total of about EUR 230 million over the life of the coming CAP budget. 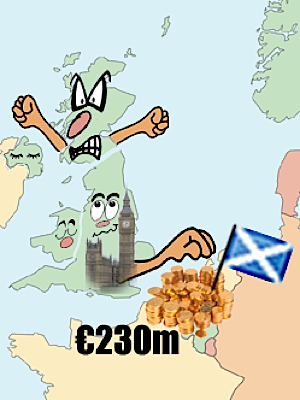 Last Friday, the UK government announced that the relative CAP funding shares for farmers in England, Northern Ireland, Wales and Scotland will remain unchanged for a total allocation of EUR 27.6 billion. “Following extensive consultation with the devolved administrations, the government has concluded that the change in CAP funding on the current seven year period will be shared equally between the four UK administrations,” the ministry announced.

Environment secretary of state Owen Paterson crowed: “The UK government fought hard for the best-possible deal on CAP, and we’ve worked closely with farmers and ministers from Scotland, Wales and Northern Ireland to make sure that this is fairly allocated across the UK.”

On October 3, the National Farmers Union Scotland met Paterson in Aberdeen to voice its concern over its members’ urgent need for the uplift money to restore competitivity in Scottish agriculture. In the wake of the Westminster cabinet reshuffle the following week, NFUS also sent fresh copies of its CAP briefings to the new junior farming minister George Eustice and Secretary of State for Scotland Alistair Carmichael.

Paterson has been in post for just over a year now and is running DEFRA with a new junior minister hand-picked for his Eurosceptic views. Clearly, Paterson ignored last month’s all-party letter from the Scottish Parliament at Holyrood, in which Scottish parliamentarians across the political spectrum had expressed their growing anger and dismay, copying in the recently-appointed Carmichael, who happens to be a farmer’s son, married to a vet.

“We are writing to express cross-party support in the Scottish Parliament on an issue relating to the imminent decision on the within-UK allocation of the UK’s CAP budget receipts for 2014 to 2020: namely, the need for the UK’s external convergence receipts under CAP Pillar 1 to be allocated to Scotland.

“These receipts only exist because of Scotland’s current position. All other parts of the UK are above the threshold set by the EU for external convergence, and it is only because of Scotland’s extremely low average level of Pillar 1 payments per hectare that the UK as a whole fell below the threshold and qualified for an external convergence uplift. Passing on this uplift to Scotland will also not entail any deductions at all for farming colleagues in England, Wales or Northern Ireland. (emphasis added)

“The European methodology focussed entirely on per-hectare levels of payment, and the within-UK decision must be on the same basis.

“It is helpful that the European Commission has quantified the uplift precisely, so that it is possible to know exactly how much funding is involved and avoid any risk of cutting into funding which should correctly go to farmers in England, Wales and Northern Ireland.

“We urge you to acknowledge that the only fair outcome on the external convergence funding is for it to come to Scotland, the only part of the UK to be below the EU’s threshold. We would welcome an opportunity to meet with you to discuss this important subject.”

Alyn Smith MEP added; “Scotland’s farmers are entitled to this money. The EU allocated the budget to our member state government in order to rectify the situation we have in Scotland. It is being withheld, I’ll do my utmost to reverse this dreadful decision and I call upon all of Scotland’s politicians to continue our cross party efforts to fight Scotland’s corner.”

To add insult to injury, the English NFU, NFU-Cymru and the Ulster Farmers’ Union issued a joint statement welcoming the English minister’s decision. In a particularly heavy-handed passage, the unions said: “We are pleased that Ministers have listened to our representations and have decided to resist pressure from Scotland for an increased share that would have been at the expense of other parts of the UK.”

This is a point that the Scots reject totally: at every point they have been clear that there would have been no disadvantage incurred by the other farming nations.

Writing on the NFU Scotland website, president Nigel Miller declared: “It is a bitter blow that we have not secured an immediate uplift in our budget allocation.” He added: “The UK must follow Europe’s clear steer on budget convergence and put in place a process that will eventually see arable producers in Berwickshire receive the same level of support as those in Norfolk or hill farmers in the Highlands get equivalent support to those farming in the Lake District.”

Unlike the Westminster Conservatives, Miller remains committed to European policy objectives. “Europe has mapped out a convergence timetable that asks member states to bring all payments closer to an EU average figure of EUR 196 per ha by 2019. In Scotland, that figure is currently closer to EUR 100 per ha.”

Within the context of European CAP alignment, Miller believes that: “This budget allocation was a missed opportunity to start that convergence process but there is a clear commitment from Owen Paterson that a review of the internal allocation of UK CAP funds will start in 2016. That must start a process of convergence in 2017 that moves more money to Scotland in keeping with EU objectives.”

This is a relatively easy commitment for Paterson to make, knowing that there is a Westminster election due betweentimes, in which the promises of previous incumbents can be watered down. In the meantime, he has managed to blunt the impact of CAP budget cuts for the rest of the UK by redistributing Scottish uplift funding.

Westminster has already made a bid to tame the Scottish independence referendum voters by announcing the transfer of shipbuilding work out of the south of England to the Clyde in Scotland. The cabinet may think that there are fewer votes in farming than industry or it might simply be misunderstanding agriculture as usual.

Working Galloway farmer Neale McQuistin, speaking on behalf of the Farming for Yes campaign, declared: “This money has only accrued to the UK because of Scotland’s unique landscape, and for the UK to refuse to pass it on at a time when Scotland’s farmers need all the support we can get is just remarkable.”

Welcoming the cross-party support in the Scottish Parliament, McQuistin added: “We were delighted to see Scotland’s politicians – LibDem, Labour, Tory and SNP – unite as one in Holyrood to call for this cash to be passed on. It is only coming to the UK because of us, and it was great to see Scotland’s parties fighting Scotland’s farming corner.”

With relations at a low ebb, McQuistin commented: “For the ‘badgers have moved the goalposts’ London Minister to refuse to pass this money on really does show how Scotland’s relationship with the UK actually works.”