Late in the evening of November 4th at a special meeting in Munich, 16 regional agricultural ministers and their federal counterpart finally struck a disappointing deal on the CAP implementation in Germany and the distribution of agricultural EU funds from 2014. The conference was accompanied by protests from environmental and agricultural organisations of the German alliance ‘Meine Landwirtschaft‘. 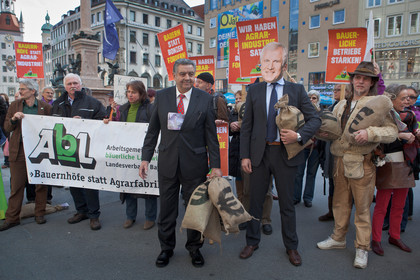 The demands of agricultural and environmental groups were only marginally met. Instead of 30%, only 6.9% of the 5 billion € of direct payments will be used to top up payments for the first hectares, in favor of smaller farm operations. In addition to the approximately 300 € per hectare, 50€ for the first 30 acres and 30 € for the following 16 acres (up to a total of 46 hectares) will be paid. This 6.9% from the first pillar represents approximately 345m €.

Starting in 2015, 4.5% instead of a possible 15% will be transferred from Pillar I (direct payments to farmers) to Pillar II for targeted environmental programs. This will total around 225m €, or about 20% of the 1.2b € funding for the second pillar.

Young farmers should be delighted by one new decision: the first 90 acres will be subsidized with an additional 50 €.

Discrepancies in both Pillars between the different states should be adjusted gradually until there is a uniform national base premium.  This will be done in 3 equal steps leading up to 2019 (2017 – 2018 – 2019). The federal government will also add an additional 200m € to the 6.9b € from the EU. 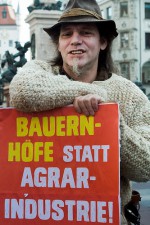 Press releases on the outcome of this meeting (German):

With just seven weeks to go before the May 15 deadline for applications under the Basic Payments Scheme (BPS) the UK government has climbed down from its dogmatic commitment to digital by default. The Rural Payments Agency (RPA) will still require farmers to register online, but is making preparations to input data from paper forms. RPA chief executive Mark Grimshaw welcomed the possibility of more time for BPS claims, with the European Commission’s offer of an extended deadline of June 15. This was made by European agriculture commissioner Phil Hogan. According to the RPA, “over 80%” of English farms have registered. Meanwhile, the RPA is providing mobile units to reach isolated farmers, in addition to its 50-strong network of drop-in centres. Around 15,000 eligible farmers still need to register. Tenant Farmers’ Association (TFA) chief executive George Dunn expressed his relief that “DEFRA has at last accepted the need to abandon its plans for online only applications,” adding that “…the RPA has been left to pick up the pieces.” During the past few weeks, his membership […]

Soaring grain prices, alongside gas, oil, fertilizers and pesticides, have sparked an unexpected debate on food production in the EU. A dependent and completely overexposed agricultural system has brought with it fear of food insecurity. In this article, we explore the tools that the commission is using to assess the potential of CAP Strategic Plans in reaching food security and propose our own analyses. […]