What’s the current state of play for organic and conventional farming in Ireland? How are they performing by environmental and other measures? Let’s take a closer look.

Arc2020’s EU Correspondent Dr. Oliver Moore was busy in Ireland during the week. There, he reported on a 2 day organic farming conference.

He also appeared on the main National Radio Station, RTE 1. On the widely listened to farm radio show Countrywide, he outlined what’s worthwhile about organic farming, drew attention to ARC’s work on the EIP – the European Innovation Partnership  – while also explaining why so few farmers have gone the organic route thus far on the island.

You can listen to the show here (countrywide november 2013).

There are less than 1700 organic farmers in Ireland, which is less than 2% of the total. Why is this? There are a number of reasons.

This latter point is important. In a November 2011 a report called “Use and efficiency of public support measures addressing organic farming” was compiled for the EU Commission. This report, by Sanders (et al, 2011) points out:
“Policy matters – a lot. The quantitative and qualitative analysis showed that public support for the  organic sector  is the major driver for organic sector development and the sector has developed within the framework of state intervention.

However, the analysis has shown that public support measures do not act alone and may have little  impact if other non‐public support factors are absent. Environments supportive to organic farming  are those  in  which  organic  businesses  are  economically  viable and represent  a well‐functioning competitive industry, where the public is positive towards organic, and where there is a positive market environment so that organic operators see market prospects, and where all actors investing in  organic  business  have confidence in  policies.  These  factors  considerably  influence  the development of the organic sector.”

So while it is not the only element, state supports are important in helping organic farming grow.

At the recent National Organic Conference, Minister of State with responsibility for organic farming claimed to invest E5 million each year in the sector. Generally however, state supports have declined, especially since the Department of Agriculture’s marketing wing, Bord Bia, initiated “Origin Green“. This is a marketing initiative to promote Irish food outside of the country as especially environmentally friendly. While there is some truth in this – Irish beef has 5th lowest, while Irish dairy has the joint lowest Green House Gas emissions in Europe –  and while efforts are constantly being made to improve this performance, it is also still the case that in environmental terms, organic farming and food still perform better, in Ireland and elsewhere.

National Organic Week was cancelled, as were the National Organic Awards for 2013. Very little however, replaced it, and it is unclear what has happened to the organic marketing budget for 2013.

Agri-food emissions in Ireland are up 3% according to the Irish Environmental Protection Agency. This is in line with the government’s plan for growth in the sector, Food Harvest 2020. So the Irish government is both growing emissions in agriculture, and doing this as part of a plan, while officially trying to reduce overall emissions  – supposedly by 20% by 2020, if EU targets are to be met. 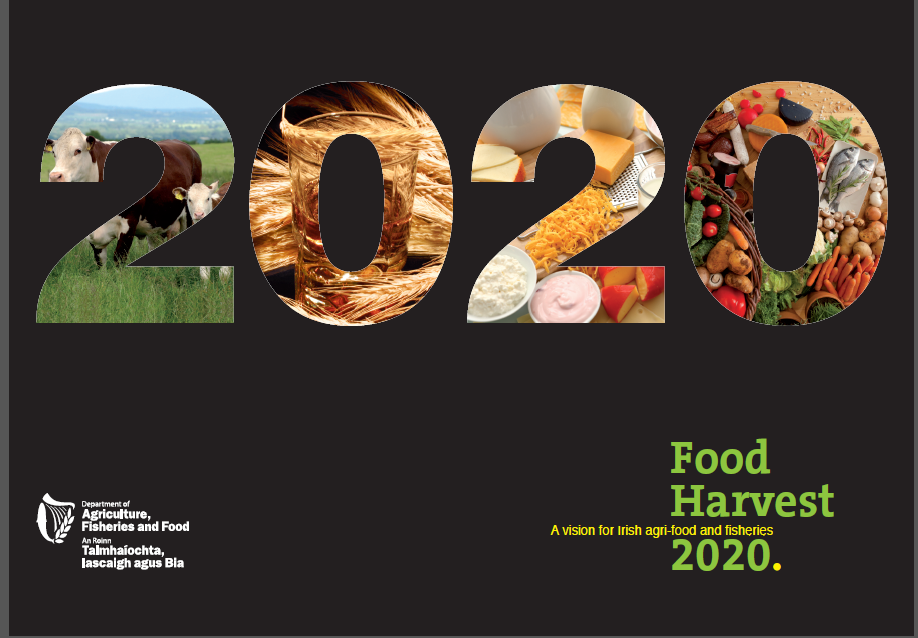 The Irish EPA also fear that Ireland is very likely to miss its 2020 target of a 20% reduction.

There are other serious concerns too about the environmental effects of this growth plan, on water, air and biodiversity, as the Irish Environmental Pillar (a platform of environmentally concerned groups) point out.

A very weak Organic ‘Action’ plan for the organic sector was also launched recently, which is strong on aspiration and weak on actual action. The number of organic advisors in the Department of Agriculture has halved.

In this context, the plans, also in Food  Harvest2020, for organic farming to grow to 5% of all Irish farming, are completely off target.

While organic farming could help contribute to bettering Irish farming’s environmental performance, little is being down at present to grow this sector significantly.

As so often is the case, Europe, CAP reform and as part of this, potentially also the EIP – European Innovation Partnership – may offer the best hope for helping develop policy to grow the organic sector in Ireland, and to still further improve the environmental performance of farming in general there.

‘Can EU CAP it?’ Project is LIVE

The ‘Can EU CAP it?’ project with its e-learning platform is now online. […]

On December 18, 2020, the Polish Ministry of Agriculture and Rural Development published the first version of the future National CAP Strategic Plan for public consultation. Almost 4,000 comments were received in response. Here is our analysis. […]