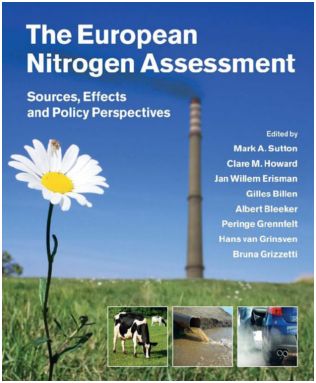 If meat, milk and egg consumption were to drop by 50%, Europe’s greenhouse gas emissions would drop by 40%. That’s one of the simple, take home messages from a new study, published 25th April, which also finds a myriad of other positives in this shift away from livestock.

Arc2020 has interviewed two of the lead authors of the paper. In this post, we’ll outline the core elements of the study. In the follow up post, our exclusive Q&A with the authors will feature.

So what are the study’s key findings?

•Lower meat and dairy consumption would make the EU an exporter of cereals.

The study, along with the European Nitrogen Assessment (pic above) reveal a potentially different Europe, and, by extension, world. The effects would be global because of the changes to, for example, global cereal production with Europe becoming an exporter rather than importer of grains.

Report lead author Henk Westhoek, program manager for Agriculture and Food at PBL (the Netherlands Environmental Assessment Agency) said, “The report shows that the nitrogen footprint of meat and dairy is considerably higher than that from plant-based products. If all people within the EU would halve their meat and dairy consumption, this would reduce greenhouse gas emissions from agriculture by 25 to 40%, and nitrogen emissions by 40%.”

As co-lead author Professor Mark A Sutton put it “the present study shows that there is huge power for pollution control in simply reducing our meat and dairy consumption.”

“The EU could become a major exporter of food products, instead of a major importer of for example soy beans.”

As the paper itself states: “Due to reduced feed demand, the use of imported soybean meal would drop by 75% and the EU would become a large net exporter of basic food commodities. Given increasing global food demand, the beneficial environmental effects of dietary changes within the EU, therefore, would extend beyond its territory. The results reflect the large share of livestock production in the total environmental impact of EU agriculture”.

The paper also looked at what might happen in this new Europe of fewer livestock/ Fewer livestock “would mean a lower demand for feed, including forage (mostly grass and forage maize). The alternative diets therefore would result in opportunities to change the use of some of the land that is currently needed for feeding animals. We explored two scenarios for land that would be affected by such production changes: a greening world and a high prices world. We assessed the effects on greenhouse gas and reactive nitrogen emissions, land use, the use of mineral fertilisers and manure, and on N deposition in Europe.” Greening here refers to a shift over to biofuels.

Why did they choose a 50% reduction?

The paper itself states: “The 50% level of reduction was chosen for two reasons. It was expected that, under a 50% reduction in livestock production, most permanent grasslands and domestic by-products would still be used in the agricultural system. With regard to dietary composition, we expect that a 50% reduction in the consumption of livestock products would stay reasonably well within public health guidelines on the intake of proteins, micro-nutrients and vitamins. Maintaining a 50% share of livestock products in the human diet would accommodate a variation in diets among the population, as currently not all individual diets are well-balanced.”

Importantly, they “assumed that the reduced intake of meat, dairy and eggs would be compensated by an increase in cereals, on the basis of food calorie intake” while “fish consumption was assumed to remain on current levels”.

What were the results?

“We calculated that in diets with a lower consumption of meat, dairy and eggs, the average consumption of cereals increases by 10–49% . The protein intake in the alternative diet is up to about 10% lower, nevertheless, the mean protein intake is still at least 50% higher than the dietary requirements set out by the World Health Organization (WHO) (WHO, 2007). Saturated Fat’s were also down “by up to 40%”, very close to the recommended levels. They add “Significant health benefits are expected to result from a lower intake of saturated fats and red meat, as diets rich in saturated fats are associated with an increased risk of cardiovascular diseases (CVD) and stroke.” They also make associations with likely reductions in cancer rates, as well with reducing the overuse of antibiotics, improving water quality (nitrogen) and reducing air pollution (methane).

The reduction in livestock production will lead to a reduced demand for feed. They have two scenarios for this  – high prices and what they call greening – a move over to energy crops. They say “In the high prices land-use scenario, with a 50% reduction in all meat and dairy production, 9.2 million hectares of mainly intensively managed permanent grassland and 14.5 million hectares of arable land are no longer required for feeding European livestock. This land, instead, will be used for additional cereal production, leading to an increase in EU cereal acreage from 60 to 84 million hectares and in the net export of cereals from 3 to 174 million tonnes . In the greening land-use scenario, around 14.5 million hectares are used in the cultivation of perennial energy crops.”

A “cascade” of environmental positives is pointed to with regard to the reduction in Nitrogen pollution with this livestock reduction. In terms of GHG emissions, their greening model results in a better reduction when compared to their high prices scenario – 42% compared to 19%.

The effect of this sort of a shift in diet would impact the regions of Europe differently. As a UK example cited in the paper points out, regions in the more mountainous parts of the UK – Scotland and Wales – would suffer when compared to areas with good quality arable land.  “However, if the attitude towards food were to change within society and people would opt for products with a higher added value, such as meat and dairy produced in systems with a higher level of animal welfare, the economic effects on the livestock sector would be less severe.”

So what’s the Arc2020.eu take on this study? We’ll post an exclusive interview with lead authors Henk Westhoek and Mark A Sutton here on our site Wednesday.  Drop by!

Low cost labour intensive vegetable production has been under strain in recent weeks. Tens of thousands of seasonal workers have moved from east to west –  as they do each year. This year is not, however, a typical year. Covid19 has added new dimensions, while also shining a spotlight on an otherwise hidden army of harvesters. But is harvesting the white gold more valuable than the health of Romanian farm workers? […]

antimicrobial resistance is on the rise and farm animals are implicated. So what to do? […]