In anticipation of the 2015 figures on direct payments distribution, due in a couple of weeks, we highlight a new post by Alan Matthews using the 2014 figures. Matthews shows in detail just how unbalanced CAP payments are between higher and lower income farmers.

Each year, the Commission presents a report on the distribution of direct aids to agricultural producers (links are provided on this web page). In this report, the Commission presents the breakdown of direct payments by Member State and size-class of aid. It is the source for the graphs which compare the cumulative amounts of payments with the cumulative number of beneficiaries.

The graph from the most recent report for the 2014 financial year (thus covering direct payments made to farmers in 2013 as Member States are reimbursed in the following financial year) is shown below. It confirms that the oft-quoted statistic that 80% of direct payments go to just 20% of farmer beneficiaries is alive and well; indeed, the distribution is even more skewed in Bulgaria and Romania than in other Member States. 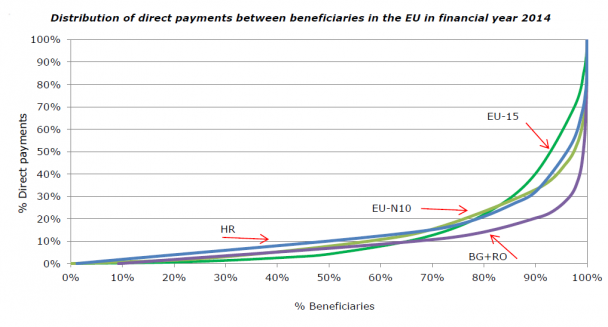 The 2013 CAP reform attempted to reduce the degree of inequality in the distribution of payments through two mechanisms, degressivity/capping and the redistributive payment. We will not see the impact of these two measures until the Commission publishes its next report which will give information on the distribution of payments made to farmers in 2014, the first year of implementation of these reforms. However, do not expect any dramatic changes.

Degressivity required Member States to reduce basic payments over €150,000 per farm by a minimum of 5%. Member States could opt for any reduction percentage up to 100% (capping), and nine Member States have opted to cap payments at amounts between €150,000 and €600,000. To avoid disproportionate effects on large farms with high employment numbers, Member States could take into account salaried labour intensity when applying the mechanism. The amount of money affected by degressivity/capping is, in practice, very limited. The total amounted to €109 million in 2015, almost two-thirds of which is accounted for by Hungary.

A potentially more equalising measure was the new voluntary possibility to pay a redistributive payment on the first hectares farmed. Up to 30% of a country’s national ceiling could be devoted to this, and eight Member States have implemented it. The amount involved in the redistributive payment is larger than that affected by degressivity/capping, amounting to €1.25 billion in 2015. Because this redistribution is financed by a reduction in the basic payment to all farms, its impact on the overall distribution of payments among farms will also be limited.

The Commission’s presentation of the direct payments data sorts the distribution according to the size of the individual payment made to each farmer. However, it does not tell us whether it is richer or poorer farmers (in terms of income from farming, not overall income) who receive the largest payments.

Most of us will intuitively assume that the largest direct payments go to those farms with the largest farm incomes. This is broadly correct, but there are exceptions. Direct aids are linked to land area. Some farm enterprises can be high value (and high income) while having relatively few eligible hectares and thus be in receipt of relatively small direct payments, e.g. horticulture, vineyards and intensive livestock production. Conversely, extensively-grazed upland farms might be recipients of large direct payments because of their large areas but have low farm income because of the inherent unprofitability of this production.

I raise this question even though this is not a course of action that I would recommend. With over 40% of EU farmers having an additional off-farm income, as well as many others in receipt of state pensions and other state welfare payments, the income generated by the farm is not a valid indicator of income need. Also, if a farmer’s direct payments were dependent on the income it reported, we could anticipate a lot of creative book-keeping and rising employment for accountants. Nonetheless, in the absence of better figures, it is of interest to ask what share of direct aids is paid to farmers with a farm income above particular thresholds.

Matching direct payments with the income earned from farming requires the use of farm accounts data, and specifically the DG AGRI FADN database. To perform the analysis properly would require access to the individual farm accounts in the FADN database. This is not normally available. Instead, FADN makes available aggregated data in its public database which can help to throw some light on this question. 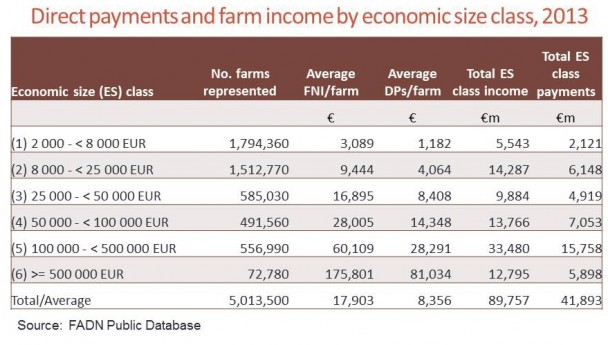 Unfortunately, it is not a simple matter to compare distributions derived from the Commission’s data and the FADN database. The Commission distribution is based on the expenditure paid as direct aid according to Regulation (EC) No 73/2009 aggregated by every individual beneficiary identification code (‘unique identifier’) assigned through the Integrated Administrative Control System (IACS). The Commission 2014 report on the distribution of direct payments covered €41.7 billion in direct payments to 7.52 million beneficiaries in 2013.

The FADN database is based on a sample of commercial farms so it is representative of 5.0 million holdings in the EU-28 (for comparison, Eurostat enumerated 10.8 million holdings in 2013). Many of the very smallest holdings counted by Eurostat but excluded from the FADN sample are also excluded from receiving direct payments. However, around 2.5 million beneficiaries of direct payments are not included in the FADN database. These are presumably farms which produce less than €2,000 of total standard output annually.

From the annex to the 2014 Commission report it is possible to work out that the 2.5 million farms that received less than €500 each in direct payments received only €647 million between them (tables on page 5/24). The other 5.0 million farms shared the remaining €41.0 billion. This total is very close to the total direct payments received by the 5.0 million farms represented by the FADN sample of commercial farms (estimated at €41.9 billion in the table above). Despite the differences in the approach to deriving these figures, we will proceed by assuming that these two sets of figures represent the same farms.

Results for the distribution of direct payments by farm income levels

In order to construct a cumulative distribution of payments ranking farms by their income analogous to the distribution in the Commission report ranking farms by the size of the payment received I convert the 6 economic size classes into 10 income deciles. To this this, I make the simplifying assumption that each farm in each economic size class earns the average income and receives the average direct payment for that size class. In practice, the error introduced by this assumption is not likely to be very significant.

The resulting distribution (shown below) is less unequal than the distribution shown above taken from the Commission’s report. Instead of the 80-20 split shown when we rank beneficiaries by the size of their payments, the distribution is now more 60-20. That is, the 60% of farms represented by the FADN sample with the lowest incomes receive 20% of the total direct payments. 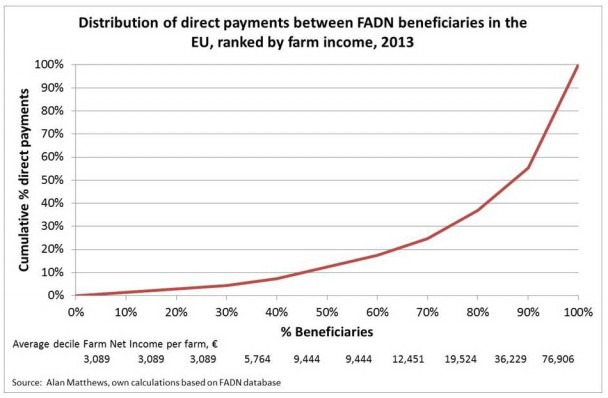 We now add these farms as a new economic size class (< 2000 EUR) by adding both the total farm income and total direct payments figures to the FADN totals and reconstruct the distribution as before in terms of deciles. The resulting distribution is shown in the figure below. 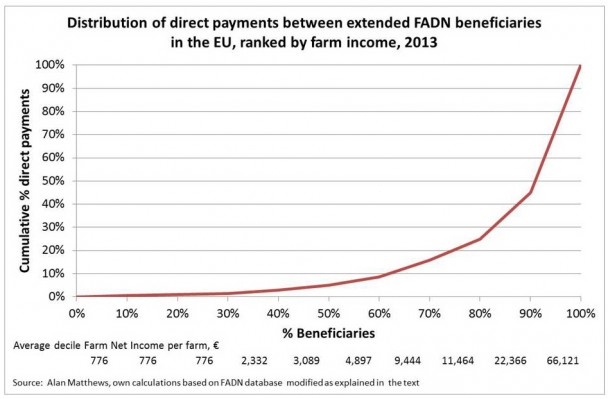 This distribution is now much closer to the one in the Commission’s report, albeit still somewhat less unequal – the 80% of farmers with the lowest incomes receive about 25% of total direct payments. This could be due to the simplifying assumption I made that all farms in each economic size class had the same farm income and received the same direct payments when constructing the deciles. However, the fact that some farms with small incomes from farming may receive relatively large amounts of direct payments, while some farms with large incomes from farming may receive relatively low amounts of direct payments, would tend to make this a more equal distribution than the one shown in the Commission’s report in any event.

My approximation to the distribution of direct payments by farm income class by decile is shown in the final table below. The total amount of direct payments allocated over the ten deciles (€42.5 bn) is slightly greater than the actual amount reimbursed to Member States for the payments made in 2013 (€41.7 bn). Nonetheless, the numbers look plausible and, to my knowledge, this is the first time the direct payments data have been presented in this way. 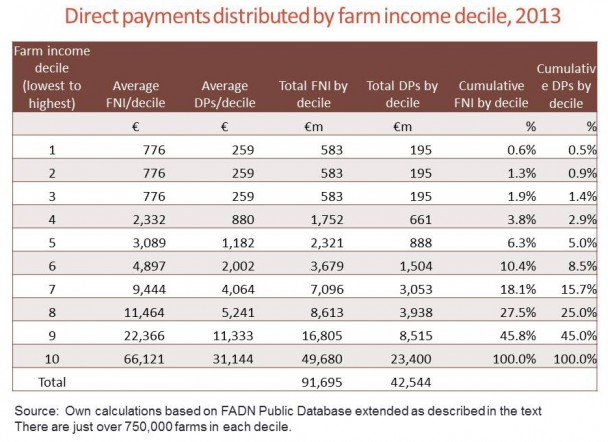 If indeed direct payments are intended to support the incomes of farms with low farm incomes (defined as those with incomes from farming below the median), it is a highly ineffective policy. As said so often before, problems of low incomes among farmers and rural poverty are best addressed by direct income support and social welfare policies, not by agricultural policy.

For those interested, the spreadsheet showing the calculations to derive this distribution is available here.

This post was written by Alan Matthews and first appeared on the CAPreform.eu blog and licensed under a Creative Commons Attribution-Share Alike 3.0 Unported License.

Alan Matthews is Professor Emeritus of European Agricultural Policy at Trinity College, Dublin, Ireland. He is a past-President of the European Association of Agricultural Economists and is currently a member of Ireland’s Climate Change Advisory Council. He is a regular contributor to the blog capreform.eu on issues relating to the EU’s Common Agricultural Policy.

On 11-12 October 2021, the agri-ministers from all over the EU will be invited to share their views on design and approval of the CAP Strategic Plan, with emphasis on transparency and inclusion. With no sense of irony, this meeting will be held behind closed doors. […]

Last week’s damning report on CAP and biodiversity was a wake-up call. But will the Green Deal Commission go back to sleep? The European Court of Auditors insists CAP must deliver more in the 2030 biodiversity strategy. Civil society organizations are now watching closely to see the Commission doesn’t hit snooze and sink back into business as usual. Louise Kelleher takes us through the reactions. […]