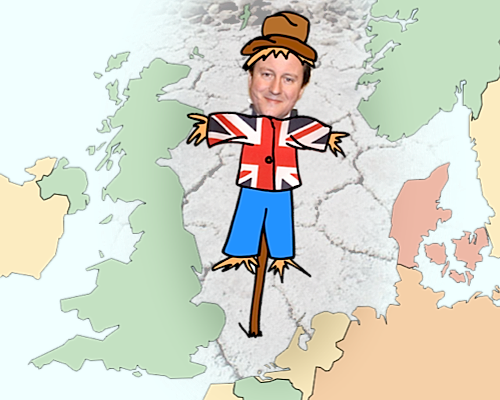 Got a spare few billion for UK farmers gov? This may well be needed if the Brexit – the British exit from the EU – happens after the tory-proposed  referendum in 2017 there.

With the approach of the 2015 general election, UK prime minister David Cameron has been somewhat swept up by eurosceptic tendencies. Bereft of policies, yet urging change at all costs, these extremists were once only to be found on the fringes of the UK parliamentary world.

However, UKIP is rising fast and is taking UK tory MPs and seats with them. With a UKIP bridgehead in Westminster, Cameron needs to rein in his own party before the trickle becomes a stampede.

While Labour and the Liberal Democrats oppose holding a referendum on EU membership, the tories have pledged one for 2017 if they get re-elected in 2015.

What has yet to be challenged is the dangerous assumption that the business of agriculture will continue to deliver anything like what it currently does.

Pillar I funding could well account for as much as half and possibly more of UK farmers’ aggregated earnings in the coming phase of the CAP. In November, the UK government published its statement of Total Income From Farming (TIFF) for calendar year 2013, which group up the sector’s total earnings. The calculations include GBP 3.27 billion representing “Other subsidies on production”, before stripping out wages, rent and interest to arrive at the final figure of GBP 5.64 billion. 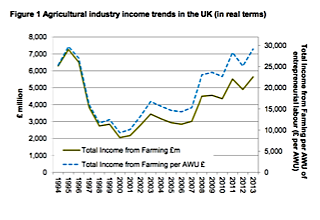 This particular economic indicator is a blunt weapon in the hands of policymakers with a pet outlook to push, however. From a simplified picture of aggregated data for the whole sector such as the one below, it is easy to see why people like former environment minister Owen Paterson believed that the rural economy was growing steadily while he was in office. There is no single, sector-wide indicator that can speak for interdependent sections, such as livestock and cereals, for instance.

A finely-tuned study of the proportion of subsidy in EU27 farm incomes is offered by professor Alan Matthews. His analysis of figures drawn from DG Agri’s Farm Accountancy Data Network (FADN) suggests that subsidy dependence across the entire EU is probably higher than it first appears.

The National Farmers’ Union (NFU) refrains from making any political comment, even on the hazards of Brexit for its membership. However in January 2013, the current deputy director general Martin Haworth told farmers in Lincolnshire that: “In general terms and notwithstanding our frustrations with some EU regulation, I would suggest that UK agriculture would be better off inside the EU.”

Trade would be more difficult for a post-EU Britain, Haworth warned: “More than one third of the lamb we produce in the UK is exported to Europe for example. Alternatively, if we negotiated arrangements which allowed us to continue to trade freely we would still have to follow rules which we would play no part in formulating.”

He argued that UK farmers would be competing with one hand tied behind their backs: “There could also be a serious risk that we would have to compete against other European farmers who would continue to receive CAP support payments, while UK farmers received none.”

More on the Brexit

What others are saying… […]