Below is a version of the EU’s Farm2Fork Strategy on Sustainable Food Systems Draft Action Plan, as of 13th January. 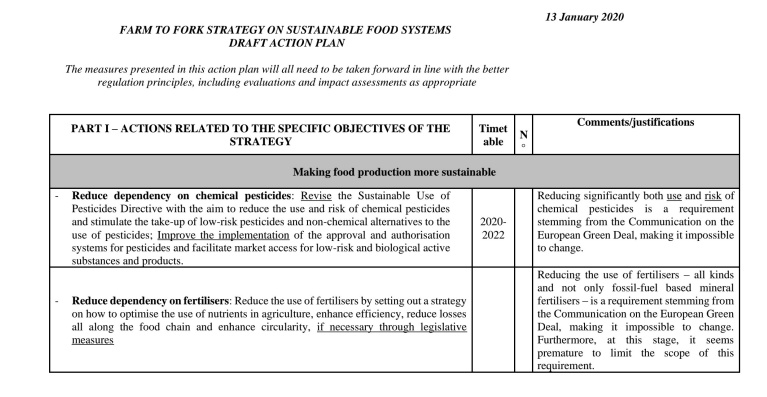 Since the announcement of the EU Green Deal, there has been something of a battle underway in agri-food between different actors.  By potentially sharing farming and food decision-making power among more than one DGs (Directorates-General) in the European Commission, the strategy threatens the power of the AG Commissioner.

Moreover the Green Deal’s announced ambition is both stronger than anything in CAP heretofore, and is at variance with the Council of Ministers. (The Council of Ministers is made up of the agriculture ministers of the various member states, who met this week and began the process of watering down the Commission’s CAP plan – as usual.)

We will present an analysis of where we think things are with CAP and the Green Deal in the days ahead. In the mean time, in the interests of transparency, we present here to the public a leaked document from 13th January on the Farm 2 Fork Strategy.

This is still a work in progress by the DGs, most likely a joint document between the various DGs – SANTE and AGRI in particular, as SANTE leads on Farm 2 Fork, but AGRI clearly has Agriculture in its remit.

More including analysis in the coming days.

(Brussels, 02/10/13) BEGINS On Monday the European Parliament’s Agriculture Committee (COMAGRI) voted on the remaining issues on CAP reform. This follows the substantive agreement in June in Ireland and the final trilogue between Parliament, Council and Commission last week, where the Council strong-armed the Parliament into ceding its position, aided by the Commission. The committee vote still needs to be confirmed by Parliament as a whole in a plenary vote at the November session. “The co-decision procedure on CAP reform has been a long, epic process, full of delays and brinkmanship. In the end however, it also represents, unfortunately, a missed opportunity to really, radically reform the CAP. The momentum now turns to member states” Samuel Feret, ARC2020’s coordinator said. Substantial reform has been bypassed in favour of business as usual, questioning the whole notion of co-decision making and trilogue. The Council, together with anti-reform COMAGRI members opposed capping payments to even the wealthiest, while watering down greening with exemptions and loopholes and maintaining polluting and export dumping practices. Specifically The COMAGRI vote dealt with outstanding issues on DP (Direct Payments), CMO (Common Organisation of Markets), RD (Rural Development) and HZR (Horizontal Regulations). […]

Are the tobacco lobby still up to their mad old tricks? […]