UK citizens are running out of time to lodge objections to a high-tech factory pig farm that US and Dutch studies warn should be further away from human habitation. The proposal to build a 2,500 sow unit opposite Foston prison in Derbyshire will be a potential health hazard to 250 inmates and staff, as well as other local residents. 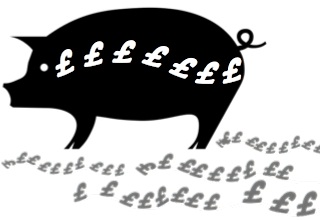 The women’s prison has a natal unit in its hospital wing and just a narrow country road separates the prison from a field which has been the focus of a long and bitter planning dispute. There have been over 50,000 objections over the past three years to the planned unit that would house about 25,000 animals, generating an estimated 45,000 tonnes of slurry a year.

The local authority has steadily refused repeated planning applications from Midland Pig Producers (MPP) at intervals over the past three years in a long-running planning inquiry that has generated a barrage of public protest. There is still time to sign an online a petition with more than 28,000 signatures opposing this project on the change.org website.

Yet MPP’s James Leavesley remains unrepentant: “Fundamentally, we have made no changes to the application,” he admits. The MPP business plan involves moving 1,000 slaughter pigs a week from the site: a journey which starts in a loading bay that is directly opposite residential properties. Staff living quarters are even closer. The site might create up to 18 new jobs, but each staff member will have about 1,000 animals to look after.

“Midland Pig Producers have not properly addressed concerns that harmful bio-aerosols, endotoxins and antibiotic resistant bacteria will affect the health of local residents,” warns Jim Davies of the Foston and Scropton Action Group.

“The planned air filtration systems will not prevent dangerous antibiotic-resistant organisms from escaping and nor will the bio-digester kill all such bacteria,” he added. “The lack of scientific understanding means Midland Pig Producers’ dangerous experiment will endanger the health of locals, prisoners and newborn babies in the prison natal unit. There is not enough research to show this facility would be safe.”

“We are throwing down the gauntlet and inviting MPP to attend a public meeting. We want them to tackle our questions face to face in real time.” Current UK government guidelines advise that: “Recent research in the United States found that those living up to 150 metres downwind of an intensive swine farming installation could be exposed to multi-drug resistant organisms [5]. However, current information is limited and the potential public health issues arising from bioaerosols from intensive farming need further evaluation.”

Local resident Sue Weston lives directly opposite the site and is concerned by the likely impact such a project would have on her son and his cardiac condition. UK government advice on airborne particulates gives cause for concern: “Both long and short-term exposure to ambient levels of particles (including PM 10 ) are associated with respiratory and cardiovascular illness and mortality [10]. People with pre-existing lung and heart disease, the elderly and children are particularly sensitive to particulate air pollution.”

The Dutch environmental health agency GGD Nederland advises against building intensive livestock units within 250 metres of sensitive locations. “The measurable concentrations of endotoxins and livestock-specific MRSA-bacteria decrease up until a background concentration at a distance of 1000 metres. Because of this, GGD Netherlands is of the opinion that when there is a distance of 250–1000 meters between an agricultural development area or company and a living area an additional risk assessment by a health expert must be carried out.”

A mini-Brexit took place back in 1985 with the UK budget rebate, which violates the principle of solidarity in European integration. But the payments made to farmers under the Common Agricultural Policy are hindering further threats of withdrawal from the European Union. […]

Children need to get out more warns UK’s National Trust

“Nature Deficiency Disorder” on rise in the UK, as a generation of children grow up out of touch with nature […]