Many of today’s global financial institutions are fueling destructive change. Turning their backs on small and medium enterprises from countries that need a sustainable base for rural development, they are instead contributing to a large scale rural exodus, while speculating with arable land, water and agricultural products. 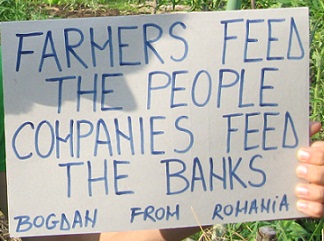 During a debate about  ‘Landgrabbing in Romania’ organised by ARC2020 last  in January, Simon Wolk, the CEO of Germanagrar, a German company active in large scale agricultural acquisition, gave a personal and naive opinion of rural development in Romania:

“You are still using outside toilets in lack of a sewerage system in the villages!”

While with the backing of European banks companies such as Germanagrar develop large agro-industrial projects in Romania; investing into big land acquisitions and industrial farming, the country’s small-scale farmers face hurdles. The very same banks that provide multi-national companies with funding are preventing small farmers from accessing European development funds, citing ineligibility. Even the state guarantees are failing to deliver; only six guarantees were given by Romania’s Government for the accession of European funds for SMEs in 2012. (1)

So who is financing what?

The DWS Global Equity Agribusiness Fund, which in 2010 had a value of US$ 822 million and is owned by Deutsche Bank Group, owns shares in large multi-national companies such as biotech giant Monsanto, and Bunge, a worldwide retail company.  Both are well-established in Eastern Europe; including Romania. (2)

In its transformation towards industrialized, monoculture-based production, modern agriculture has given birth to a staggering number of negative ecological, social, cultural and economic problems. Throughout the entire food system, it is possible to trace this crisis as it manifests itself in soil erosion, pesticide pollution, loss of biodiversity, inequitable social consequences, farm foreclosures, a rural exodus and a myriad other environmental and social problems, including unemployment. (3)

People from all over the world had enough. A couple of weeks ago, an estimated 25,000 people participated in what is known as a ‘Blockupy’ in Frankfurt. Their aim was to shut down key financial institutions like Deutsche Bank, as they are seen as main actors of Europe’s current crisis. During the actions protesters were specifically highlighting the banks implications in land grabbing and food speculation.

As politicians back banks instead of people, and police defend banks instead of democracy, Europe is burning. People are fighting for basic necessities such as food, water, services and rights that governments have taken out of their hands and given to banks and multi-nationals – at a very high price for us all to pay.

The design and approval of the future 27 CAP Strategic Plans are key moments to demonstrate the true commitment towards a fairer, greener, and rural-proofed CAP reform. The European Commissioner for Agriculture, Mr Wojciechowski, promised ‘full transparency’ and ‘open dialogue beyond DG AGRI and agri-ministers’. Now ARC can reveal that a Joint Letter has been sent by civil society organisations to the Commission to put their promises in practice. […]

Equality in the Countryside: a rural manifesto for the parliamentary opposition. A manifesto for rural equality launched by the Landworker’s Alliance at the Oxford Real Farming Conference 2016. […]

In the build up to the Forum Synergies European Rural Sustainability Gathering 17-20th May, we continue our focus on grassroots initiatives in Greece. Here, we talk to Panagiotis Sainatoudis and Vasso Kanellopoulou. The chat happened at the 17th seed festival of Peliti and the first international Olympic Seed festival in Peliti, Drama, Greece 20-22 April. […]