On the 18th of January, 2014 farmers of the Polish Zamosc County joined the “We are fed up!!” march in Berlin.  For the past seven months, these farmers have been occupying a piece of land to prevent the drilling process of a shale gas well for American oil and gas giant Chevron in the area of Zurawlow, Poland. 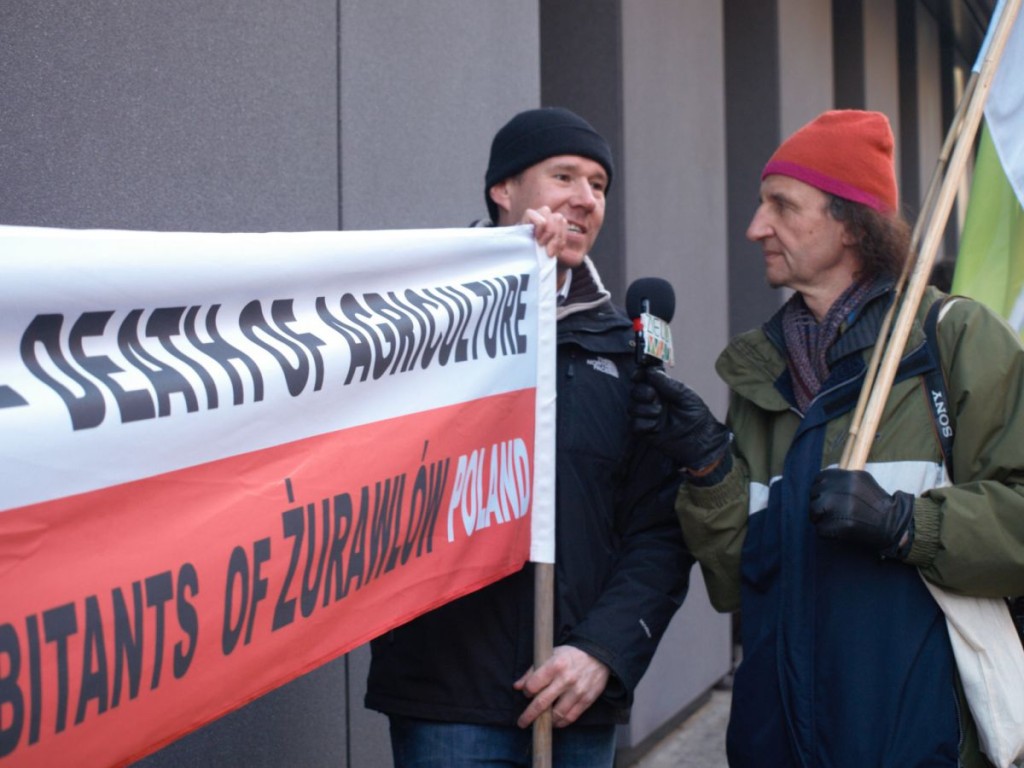 In March 2012, Chevron gave up on its first attempts to install a borehole on their municipality. But now they’re back. The first battle was recently seen on Arte Television in a documentary called the “shale-gas: an energy that divides” (see interview with director here, in French/German).

The people resisting the drill for shale gas believe that it could lead to the contamination of their water and their land. Earlier seismic tests had already caused water pollution in one well of the neighbouring town of Rogow, making it unfit for consumption. One of the protesters at the site told the Krakow Post why they had started the sit-in: “In the spring of 2011, after the seismic testing, we noticed that water pumped from wells in the village of Rogow had become murky and dark.”

The farmers demonstrating in Berlin are activists of Occupy Chevron – an anti-fracking group that has been occupying the field. Later on, Chevron tried to fence off the disputed patch of land and install CCTV cameras, but residents thwarted their efforts by building a high perimeter wall from bails of hay.

In June 2013, José Bové – French Vice-Chair of the European Parliament’s Committee on Agriculture and Rural Development  – wrote in a letter to protesting farmers in Zurawlow: “A high demand for freshwater, the production of large amounts of waste water, induced seismicity, greenhouse gas emissions, and groundwater contamination have all been linked to hydrofracking, the technology employed to extract shale gas. You are protesting to protect your land, your water, your life. (…) I express you all my support. I ask the local authorities to undertake any actions that would lead to removal of trucks and workers hired by Chevron. Any conflict escalation should absolutely be avoided.”

More on the We are fed up! demonstration here.

José Bové ‘s For a European moratorium on Shale Gas

What is the latest on the ‘revolutionary’ new farm schemes in the UK nations and how are farmers and other stakeholders reacting? James Woodward and Vicki Hird of Sustain take a look. […]