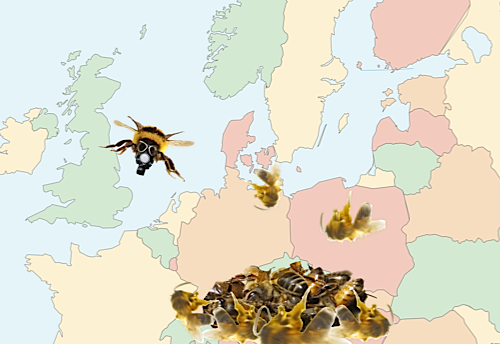 There are not enough honeybee colonies across Europe to pollinate crops, according to a study published by a team led by University of Reading researcher Dr Tom Breeze. Writing in the journal Plos One, the team warns that of the 41 European countries studied, barely half had enough honeybees to pollinate more than 90% of their crops. This means that much of European agriculture is heavily dependent on wild pollinators for its crops.

The UK, for example, can only muster enough honeybee colonies to pollinate 25% of its crops, on the optimistic assumption that the hives are co-located with crops that need pollination, which is a long way from the reality. The Baltic states are in a similar position, while France, Sweden and Germany have less than half the honeybee populations they need for crop pollination.

Being domesticated to certain degree, honeybees can be managed to pollinate a wide range of crops, although it is clear that wild pollinators are more important than might have once have been assumed. However the diversity of bumblebees and other wild pollinators across Europe has come under pressure from intensive agriculture and habitat degradation.

Beekeepers can monitor their colonies and sometimes intervene successfully to keep them going. However, there are gaping holes in the extent of what is known about the wild pollinators that we now depend on more than ever before.

The growing European acreage of biofuel crops in recent years has added to agricultural pollination requirements without making life any easier for pollinators. Even the use of neonicotinoid-dressed oilseed rape seed in the UK has been grudgingly banned with an ill grace. This is despite the fact that about 96% of the active ingredient is dispersed in the environment with no clear idea of where it is going or what effect it is having.

With pesticide use cited as one of the main causes of the decrease in pollinators, there is all the more reason to stand up against pesticides being allowed in Ecological Focus Areas, as is being pushed for by 23 Member States.

Next up on the list of growing food scandals in Europe: eggs […]

Some wild species are returning once again. But what does this mean around the Continent? […]