On 29th May, farmers in the Polish Region of West Pomerania organised a protest against land grabbing. According to the Solidarity of Farmers Trade Union: “In the times of Communism, 70% of land was State owned. Just 20 years later and Polish farmers cannot buy land anymore. Most of it has landed in the hands of foreigners – mainly Danes and Americans.” 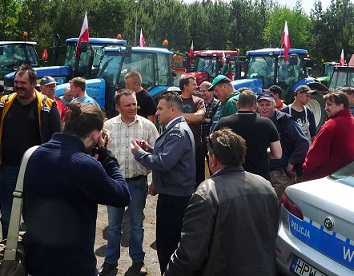 Last year farmers met with Minister of Agriculture – Stanislaw Kalemba, but the official policy which discriminates against family farmers was not changed – according to the organisers of the protests. Polish authorities provided Danish pig giant in Poland – Poldanor -financing for the biogas plants at Poldanor’s pig farms – the source of money is National Fund for the Environmental Protection (NFOS).

“What now seems underway is an unabashed attempt by Danish industrial agribusiness, with the full cooperation of the Danish government, to seize as much of Poland’s former state farm system as they can, in any way that they can” commented Tom Garrett, US rural expert.

The issue of land grabbing in Europe is gaining increasing attention. Earlier this year, ARC2020 invited two Romanian experts on the topic to travel to cities across the EU to talk about their experiences. Find out more here:

Attila Szocs overviews the issue of land grabbing, in light of the European Economic and Social Committee fact finding visit to Romania. […]