Bucharest 10th July 2012 – Activists from the Re.Generation association protested in front of the Crowne Plaza Hotel in Bucharest where ministers and influential agri-businesses were meeting for an annual forum. The activists wanted to show their dismay at the selected partipants and organisers taking part in the Agribusiness Forum (see a previous piece on the genetically modified lunch), and reiterate concerns in Romania regarding GMO cultivation. 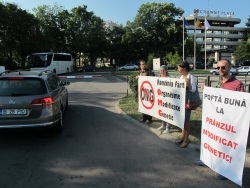 During the protest, the activists identified several influential decision makers and GMO producing or pharmaceutical companies coming to the event. “It is obvious that all participants noticed our presence in front of the hotel, but they avoided the interaction with us. We came here to inform the public about the risks of GMOs consumption and cultivation, that decision makers and companies ignore quasi-completely. It is our duty to draw a warning when, corporate pressure is being made in order to push their GMO agenda, despite the Romanian consumers who want GMOs to be banned”, declared Catinca Moldovan, a participant in the protest.

In an interview with Eco Ruralis Association on Friday, the 6th of July 2012, Achim Irimescu, the state secretary within the Minister of Agriculture, confirmed: “Pioneer and Monsanto definately do it because the agriculture is a quite important sector in Romania, as an agricultural country, so they will have a lot of benefit from promoting their products in Romania...” Achim Irimescu was also one of the speakers at Agribusiness Forum.

Bogdan Buta, director of the Genetically Modified Organisms Information Centre concluded “It seems that no one denies the purpose of this meeting today. It’s ridiculous! It is already proven that GMOs are not safe and they don’t bring economical benefits on short and mid-term. More than that, independent scientifically studies attest the negative effects of GMOs on the environment and human and animal health. We are reminded that countries with importance in European agriculture – France, Germany, Hungary, Austria and others – have banned the cultivation of genetically modified plants. Instead of representing the consumers and the 4 million small farmers of Romania, the authorities choose to play the agribusiness game. We don’t want any more Romanian Ministers of Agriculture to be influenced by Monsanto.”

How have the European Union’s newest members protected its land? Have land moratoriums worked? […]