Although at very high demand in Western Europe, organic agriculture in Romania is not encouraged at all. There are only a handful of organic farmers in Romania, all struggling to make ends meet. 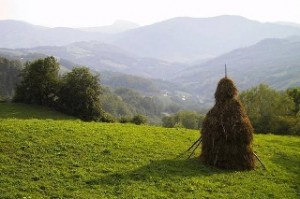 Willy Schuster, from the Bio Mosna farm in Sibiu, is one from the few producers of eco cheese in Romania. To be certified, the cow feed must come from unpolluted soil, untreated with any chemicals. Romania is one of the few European countries to still have such land. There are over 4 million hectares of pastures which have not been touched by any chemical products in the past ten years. But clean means more expensive. As nothing is mechanised, organic production is 50% smaller. That’s why the price of products is higher. In Bucharest one kilogram out of the Schuster’s family cheese could cost approximately 60 lei (12 Euros). Abroad, products could be two or three times more more expensive. However in Romania, it remains cheaper due to lack of demand. Willy Schuster doesn’t earn more than 1000 Euros/months and yet, he manages to survive, especially since setting up an organic store with twelve other bio-producers.

Approximately 15-25% of the Romanian agricultural land, untreated with chemicals, could be used for organic products. Although average sales in the European Union reached 14 billion Euros last year, Romania remains insignificant on the map of organic food consumers. In the first year after the EU accession, eco farmers didn’t receive any money from local authorities and now all chances have to be swollen by the giants of the food industry.

According to recent figures released by Eurostat, Romanian agriculture is highly unbalanced. That is not the big surprise. In the last 20 years the country’s agricultural landscape was in a continuous transformation; agrarian reforms without a long term vision, real estate and agribusiness “cowboys” from all over the world speculating on low prices, productions focusing mostly on export commodities…all in a country of peasants versus their institutional neighbours. The surprise lies in how different stakeholders interpret these figures. Let’s have a look. According to the EU analysis, Romania is the 8th agricultural power of Europe and for the year of 2014 has an agricultural production estimated to 15.5 billion Euro (1160 Euro/hectare). Poland was the only other ex-communist country which outranked Romania having a 22.5 billion Euro (1660 Euro/hectar) production. The top ranks go to France, with its 70.5 billion Euro and Germany – 51 billion Euro production. Where is the great unbalance? Crop production amounts for 73% of the total, 26% being attributed to animal farming and only 1% represents agricultural services. On the […]