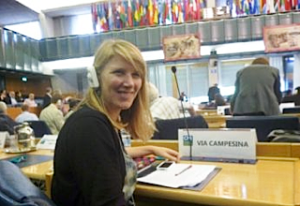 Food and agriculture will begin to contain, from now on, the right to food and not the trade rules as reference point,” declared Kalissa Regier, a Canadian farmer in the Via Campesina delegation. It marks a step towards promoting a sea change in the governance of food, farming and nutrition.

At last, the GSF establishes food as a right, distinguishing it from commodities. Setting food on the same footing as human rights, the framework acknowledges the central role of smallholders, agricultural food workers, coastal fisherfolk, pastoralists, indigenous and landless people, as well as women and young people in food and nutrition security.

“Today we can say that the historical fight of Via Campesina to avoid food being compared to a simple commodity has won a step forward,” added Yudhvir Singh, a member of the international coordinating committee of the farmer’s movement. The GSF recognises that structured employment and a minimum living wage are an essential part of food security and nutrition.

The framework also attaches importance to agroecological systems and contains Right to Food Guidelines for nutrition, based on the International Assessment of Agricultural Knowledge, Science and Technology for Development (IAASTD) report. It also contains commitments on the part of states to implement voluntary guidelines on responsible governance for the tenure of land, fisheries and forests, including agrarian reform where necessary.

During the negotiations, Via Campesina reports, there was consensus on human rights-based monitoring and accountability. This means that states, intergovernmental bodies and private businesses are all to be held accountable for actions and omissions under international human rights law.

However, as of late this week, issues such as food sovereignty had not been addressed. Via Campesina attaches great importance to food sovereignty: it complements food security by ensuring that food grown in one country is used to feed local populations first and foremost.

The potential benefits of economic activity generated by food production leave a national economy the moment food is commoditised and exported for foreign sales that rarely reflect its true value. What starts out as food production in a poor country very rapidly becomes an input cost to be driven down in a richer economy that imposes industrial standardisation on imported cash crops.

Transitioning to a Sustainable Food System with IPES

In an exciting development, the International Panel of Experts on Sustainable Food Systems (IPES-Food) has adopted a set of 10 principles to guide the transition to sustainable food systems. […]