A broad alliance of 32 German and Austrian NGOs and famers’ associations are calling for action at the European Patent Office in Munich/Germany on 30 November 2012 to highlight a pending patent decision eventually expected to become a landmark ruling. 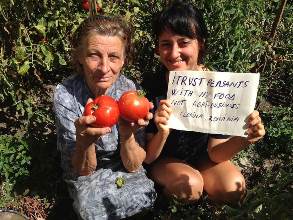 30 November 2012 marks the deadline for the public to file statements related to a precedent case on the patentability of plants and animals at the European Patent Office (EPO) in Munich. It is a patent application on a so-called wrinkled tomato (EP 1211926) derived from conventional breeding with a reduced water content to be used for making ketchup and sauces.

Although in December 2010 the EPO decided that the process for breeding such plants is not patentable it has not revoked EP 1211926. Worse still, in March 2011 it granted multinational Monsanto a patent on melons derived from conventional breeding. Many thus fear that in absence of public pressure the EPO may well bow to industry pressure. The EPO has already granted around 2000 patents on plants and 1200 patents on animal; including genetically engineered ones.

Using conventional plant breeding methods tomatoes are grown by professional and hobby gardeners all over Europe. When conventional breeding methods are patented then growers and gardeners lose the freedom to use them. Europe’s tomato lovers and growers have until 30 November 2012 to submit contestations to the EPO (click here for a template) and organisers hope to draw a large crowd to Munich on the same day.

Multinationals such as Monsanto, Bayer, Syngenta, Dupont, KWS Saat AG and BASF are increasingly filing for patents on plants and animals to control the food production chain. These are the very companies that at the same time are aggressively marketing genetically engineered plants, most of which produce insecticides and/ or are resistant to herbicides. When such patents are granted, companies not only gain control of genetically engineered seeds, but also of traditional breeding. This means that consumers, farmers, breeders and food producers will become largely dependent on patent owners. According to the NGOs organizing the action this is the wrong track for agriculture to pursue and places an unacceptable burden of risk onto consumers.

On 30 November 2012 at 11 a.m. (CET), consumers, farmers, breeders and tomato-lovers are called for action to Munich’s Odeonsplatz for a colorful march and a final action at the European Patent Office (Erhardtstr. 27) at 13 p.m.

Click here to download a contestation template asking the EPO to stop granting patents on plants and animals and to revoke EP 1211926!