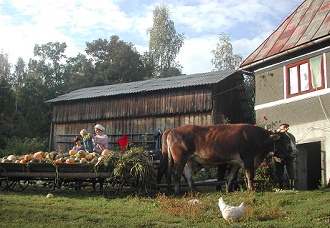 At the end of last year, the Romanian Rural Development Network (RNDR) opened discussions regarding short food chains, as part of the consultation process for the new Rural Development Plan 2015-2020. RNDR is the umbrella which regroups at national level the organizations and authorities involved in the rural development process. The proposal to start consultations on the short food chains concept came from the civil society. The discussions on this topic are part of a working group regarding Cooperation.

The result of the first two working meetings was a common position document on the Short Food Supply Chains in Romania. The creation of the document was facilitated by the Resource Centre for Solidary and Ethical Initiatives – CRIES Romania, one of the most active organizations in this topic.

„The Short Food Supply Chain (SFSC) is an alternative food production, distribution and processing system built through the participation of small producers who are followers of extensive farming practices, as well as support organizations and consumers. SFSC is a bottom-up approach, coming as a collective solution to the shortcomings of the industrial food system. […]“

SFSCs’ evolution in Romania can have a considerable potential for rural development both in terms of area and people. Or, put it another way, of the surfaces cultivated in extensive regimes and by the growing interest of citizens to participate in such actions. For peasant households and semi-subsistence farms, the development of SFSC may be a factor of coagulation and stimulation of cooperation, providing new opportunities for development.

QUALITY – key element in the definition of SFSC. SFSC guarantees food quality through direct contact with the producer or by traceability guarantees, but the quality of these products is conditioned by sustainable agriculture and practices specific to the post-productivist model. This implies the compliance to a set of rules regarding sustainable agriculture and agroecology, craft production or manufacture, compliance with nutritional recipes and last but lot least, a a proper communication regarding the origin of the product, coming from an alternative food production.

The quality of products is guaranteed also by restoring SFSC link between production, processing and consumption, achieved by shortening the supply chain and a more personalized communication, the high quality of products, obtained in an alternative agriculture system. For producers, the participation in SFSC means recovery of added value, which is lost in the conventional food production and distribution model. Where in the consumer society (and mass production), the producer becomes only supplier of raw material, while food processing and distribution become the most profitable chain links, in SFSC the producer has the opportunity to retain a high percentage of the value added chain, with the condition that the producer provide high quality and alternative guarantees for his/her products.

Unfortunately, the negotiations for approving the Romanian Rural Development Plan 2015-2020, have repetitively failed so far. The plan proposed by the Romanian Government did not meet the requirements of the European Commission; the lack of consultation with interested parties and civil society being some of the main issues.

It is not the first time that the Romanian Government has been unprepared in the implementation or planing of the Rural Development agenda. Starting with 2007, the bureaucracy and the poor implementation of Pillar II measures, lead to the the lowest absorption rate in the European Union.

Following an official meeting in Brussels, in the 26th of January, 2015, the Romanian Ministry for Agriculture declared that the European Commission will only give an «unofficial agreement » for the New Rural Development Plan, in March 2015 . The official “OK” might take much longer.

The new Rural Development Plan is announced as an ambitious project. But Romanian farmers know better and this time they won’t believe promises, only facts. Civil society is trying to keep up with the very rushed consultation process, coordinated by RNDR. Peasants and NGOs have great ideas and they are ready to build a better farming economy. But they need the fair and opened approach.

A highlight of Cork2 was the sobering presentation of Janez Potočnik of The Rural Investment Support for Europe (RISE) Foundation. he is also Co-Chair of UN International Resource Panel, Former European Commissioner for Environment, and previously of Research. […]

Parliament CAP-itualtes on all major elements of fairness for farmers and environmental standards. A leaked negotiating document reveals just 85% convergence, huge flexibilities and exemptions, all remaining GAECs weakened, eco-schemes weakened, and even the introduction of brand new exemptions that have never been in the negotiations before. Council wins, people and planet loose. […]