Hundreds of civil society activists from dozens of food and farming NGOs, farmers, policy makers, academics and concerned citizens, all converged on Brussels to tackle the question: how do we fix our broken food system? The aim of the Good Food, Good Farming conference was to work up a roadmap for the future. (Watch the brand new video summary of the conference above.) 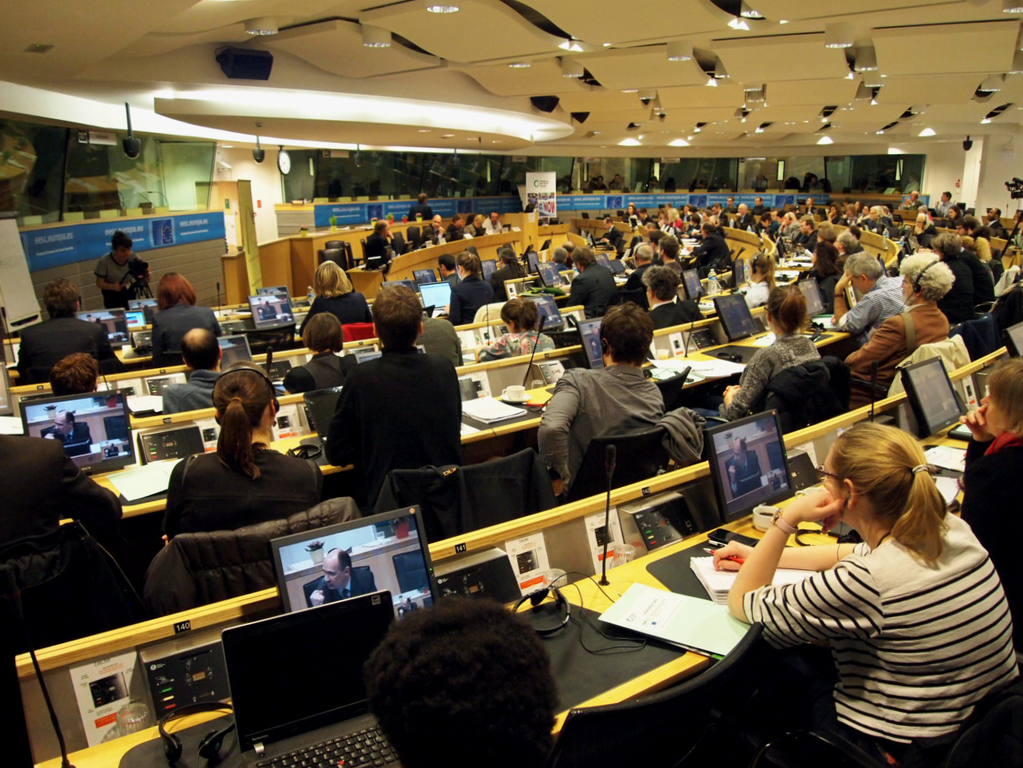 The Plenary room in the European Economic and Social Committee (EESC) building was brimming with enthusiasm and energy as proceeding got underway. Aptly, the EESC is the EU institution representing civil society. Dilyana Slavova of the EESC warmly welcomed this involvement of civil society in European food politics as President of the EESC’s agriculture, rural development and environment section.

DG Agriculture Director of Economic analysis Tassos Haniotis reminded his audience that “…markets don’t pay for the environment,” least of all in a sector like agriculture. He also, as Euractiv have pointed out, referenced the fact that the new CAP will be ‘fairer, not simpler, but maybe greener’.

Organic farmer, former scientist and vice president of the Poitou Charentes Regional Council Benoît Biteau urgently warned that farming in Europe is over-dependent on artificial inputs and that exhausted soils can no longer stock carbon. Europe may be producing too much maize and not enough of its own protein to be sustainable.

Patrick Holden, former Director of the Soil Association and founder of the Sustainable Food Trust told his audience that organic farming had been “ghetto-ised” and that farmers need a good business case for sustainable food production, backed up with figures showing benefits for their balance sheets. He also pointed to the importance of policies that deal with agri-food externalities – the real cost in pollution and other terms of the more industrialised business as usual model. A nitrogen tax to fund carbon stewardship was cited as a practical incentive, in a world where 1kg of N creates E15 of costs, or externalities. (This was one of the most tweeted comments from the conference as you can see below, with 26 retweets) 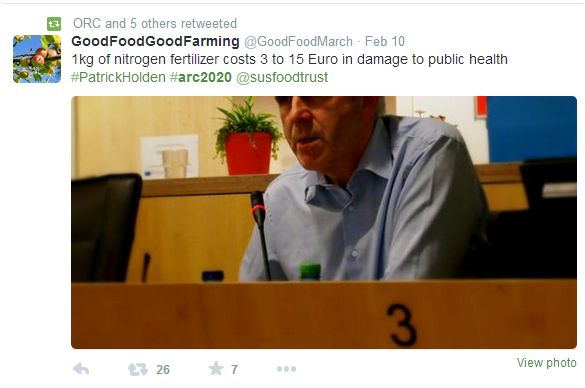 Erik Mathijs, chair of the fourth SCAR Foresight Report made the case for “agroecology 2.0” and intensification of ecological processes to meet future challenges in an increasingly urbanized and nature-deficient world.

Olivier de Schutter warned of the multiple lock-ins that go with current food production models, and that the cost of doing nothing was “enormous”: food democracy and civic food councils were spotlighted as an emerging positive from good food movements globally.

Former federal agriculture minister in Germany, and current chairwoman of the Committee on Legal Affairs and Consumer Protection  in the German Bundestag Renate Kunast praised the 2010 Commission CAP reform plans, but suggested that the policy, and a limited view of the market, is failing. So much so in fact that she finds more bees on her balcony in Berlin than in the countryside now.

Moderator from Groupe de Bruges Arie Van Der Brand summed up the mood by calling for a Common Food Policy.

The participants broke out into workshops to strategise approaches and action needed, identifying milestones for the transition to better food farming and a living countryside in 4 areas: CAP, markets and trade, sustainable diets and finally sustaining rural communities and natural resources. (markets and trade were reported back separately)

In between the end of day one and the start of day two, there were a pair of video moments. A specially commissioned video as part of a DG AGRI project on #CAP and #agroecology was shown at the reception. This was on the Leitrim Organic farmers’ Co-op, while Co-op Director John Brennan and others watched on.

And before starting on day two, part one of the conference video, recorded and fully produced the previousday and night, was aired for the first time.

The workshop facilitators reported back at the plenary of the second day:

Access to land, currently a blind spot; making farming a valued and attractive profession; reaching out more to conventional farmers; capping direct payments and making them cover employment and environmental benefits, and the associated need for measuring both positive and negative impacts and economic externalities that remain hidden for the moment.

Policy based on best available evidence and true costs of food production & consumption, identifying research gaps; urbanisation; city-rural connection, resilience; local initiatives such as city food policy councils; policy levels like public procurement; the challenge of scaling up; and vision of a whole new food policy versus changing what is already in place.

Reconnecting the North-South divide; Moving away from deep and comprehensive free trade agreements , toward piecemeal deals that protect and enhance local food systems; the link to TTIP other deals; questioning the role of EU exports and overproduction; Playing fair and using international standard setting rather than free trade agreements.

supporting initiatives to bring farmers and consumers closer together, shortening food chains, e.g. community supported agriculture (CSA) and food hubs and food supply start-ups in the  AirBnB style with a more robust legal framework than many Peer to Peer initiatives have; using rural development funds to promote organic practice; improving knowledge transfer and education; ensuring transparency along the food chain though labelling and traceability; and ensuring new entrants to farming. See above left  for the graphic harvester’s interpretation of the workshop feedback.

The final wrap-up session involved suggestions from the plenary for incorporation in the ARC roadmap. Many of the core ideas and statements were captured in animated form by a visual or graphic harvester, Eimear McNally, present throughout the conference. Here’s all the Graphic Harvester’s conference images )

Next, a redrafting and consultation phase of the ARC will begin, resulting in a roadmap towards better farming and food for the next 5 years. This will build on the draft roadmap Arc2020 have been working on for some months.

The EESC once gain hosts once again reiterated their pleasure in having hosted the ARC and reconfirmed their long term help and support, especially interesting in view of having yearly strategic gatherings such as this one.