Last October, we shared a campaign from Hungary to save Kishantos, a folk high school centre with a 452-hectare organic demonstration farm in Hungary which faced the threat of becoming another statistic in the growing number of land-grabs in Eastern Europe. On April 12th, with the tender for the land still under dispute, and several lawsuits pending, the farm was illegally destroyed. 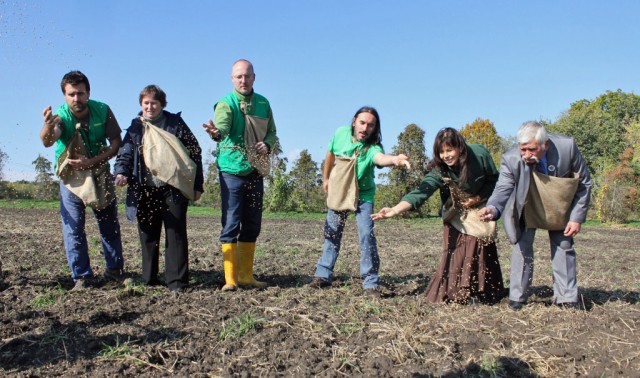 The farm, which had been managed by the Kishantos Rural Development Centre non-profit organisation for over two decades, had the mission of spreading up-to-date knowledge and the ideas of sustainability and democracy. Working on the Danish thinker N.F.S. Grundtvig’s idea of a ‘school for life’, where the living dialogue and the experience are the main instruments of education, the farm produced and preserved organic seeds and crops, and trained farmers in organic practices; the school and center where financed by the income of the farm.

The Hungarian government had given the right to lease the land in 1998, a lease which was valid until 31 October 2013.  In October, the Hungarian Land Fund – representing the State – issued an open call for tender for the rent of the land and then granted the land to ten separate business, some allegedly run by individuals with close ties to the new government.

Many civil society groups, including ARC members Friends of the Earth Europe and IFOAM, took part in actions to support and save Kishantos farm, including a symbolic action to sow wheat seeds and a petition signed by over 24,000 individuals and 300 organisations.  The local community and civil society organisations then mobilised on-the-ground actions, such as citizen patrol to protect the land from destruction.

The farm grew organic crops of the national market worth an estimated 450,000 EUR, all of which have now been destroyed.  While the legal case continues, symbolic actions are taking place – supporters of the campaign have spread organic seeds from the farm throughout balconies and gardens, and as part of a demonstration outside the ministry for Rural Developement.

If you would like to know more about this case, and how you can help, please contact Kinga Kovacs, at Friends of the Earth Hungary: kovacs.kinga@mtvsz.hu

3 of the Good Food March organisers talk to viEUws

The European Court of Auditors (ECA) most recent relevant report on CAP and climate outlines a host of serious issues and a under performances by the policy, while also making some suggestions for big, achievable climate wins. However, we in ARC2020 were a little taken aback by how the paper treated organic farming – funded as it is under CAP – and its climate impact. […]

Landgrab of the century in Mozambique?