Soberania Alimentaria (Food Sovereignty) is a quarterly publication co-edited by GRAIN, Plataforma Rural, COAG and la Via Campesina in Spain. Coordinator of the magazine Gustavo Duch says the scope of their work goes beyond spreading information and provoking discussion on rural issues and food sovereignty: 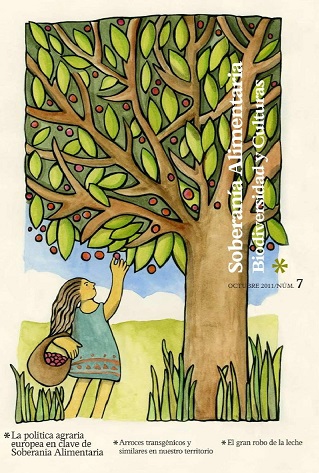 “The magazine expresses the importance and necessity of having a critical debate on the issues of agriculture and food from the perspective of food sovereignty. The magazine has an outreach function of spreading ideas, as well as information on courses, seminars and workshops. The magazine is the expression of an alliance of four entities: La via Campesina, Plataforma Rural, COAG and GRAIN. In that sense it follows the guidelines of these organisations who, in the case of Spain, aim to enable and make easier the integration of young people into the fields”

Talking about the changes happening in Spanish agriculture due to the economic crisis, Gustavo suggests that the crisis in rural areas is not new:

“For a long time, the CAP has promoted free markets for the benefit of the large corporations. This has made the decline of small-scale agriculture unstoppable, with a subsequent destruction not only of the primary economic fabric but also of the entire socio-cultural fabric – people´s lives. However, it is true that the global crisis has led to more visionary eyes pointing at the importance of ‘ruralizing’ our economies and shifting our lives to peasantry. An urban garden is not only a space for cultivating healthy food; it is a territory free from the crisis.”

“As I mentioned, in the context of our partnerships we are planning the realisation of a two-year program in order to transmit how the postulates of food sovereignty can be a suitable political platform for a lively countryside, consolidating and facilitating a generational renewal. We have planned several conferences and workshops, but fundamentally we are seeking space for people to express themselves and carry out their projects. Another tool that seems key for the country,  as we see more and more demand for the products of peasant agriculture, is to boost a relaunch of ‘farmers markets‘,  a formula  of direct marketing that has been lost with the appearance of big supermarkets like Carrefour or Mercadona.”

And his expectations for the new CAP…

CAP greening and new supports on agenda for Council

A new package of supports and a first year review of CAP greening are two of the key items on the agenda for the Agriculture and Fisheries Council meeting on Monday 18th July in Brussels. […]