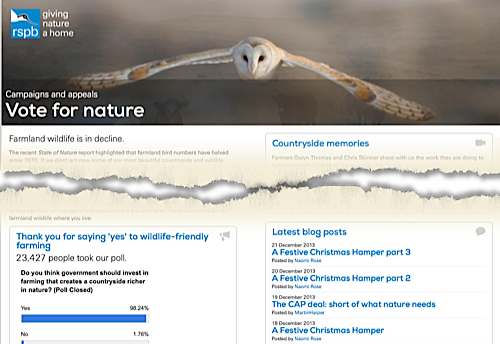 More than 23,000 birdlife and habitat campaigners said “yes” to wildlife-friendly farming in an online poll organised by the RSPB. Nearly 4,000 went on to respond to the UK government’s CAP consultation, urging a 15% transfer from Pillar I to Pillar II.

“Our members asked for three things,” RSPB agriculture policy officer Tom Lancaster told ARC2020 this week. “As well as asking for a 15% Pillar I to Pillar II funding transfer, they urged the government to apply Pillar II funding to effective agri-environmental projects and effective Pillar I greening measures.”

To be sure, Lancaster is disappointed that England’s final distribution of its GBP 15 billion CAP budget will see only 12% transferred from Pillar I to Pillar II. “But there is still scope to implement the CAP in a way that improves the prospects for the natural environment,” he conceded. Across the UK though, there is a more mixed picture, with Wales opting for 15%, Scotland 9.5% and Northern Ireland a deeply disappointing 0%.

In December, RSPB Conservation Director Martin Harper wrote: “Defra had the chance to transfer more money across to support agri-enivronment, but chose not to. Why? Because the National Farmers’ Union lobbied over Mr Paterson’s head and forced a compromise.”

Had Defra dug its heels in, UK farmers could have benefitted from GBP 1.25 billion (just over EUR 1 billion) for new commitments instead of the current GBP 926 million (EUR 770 million). Harper credits the minister with a brave attempt to resist vested interests: “Mr Paterson and officials deserve credit for fighting to the wire to secure this amount of money for agri-environment. If you followed economic logic and environmental necessity, you’d go for the full 15% – as that’s how you’d get the best value of taxpayers’ money. But politics and crude lobbying for private interest prevailed.”

For Harper, the issue remains one of accountability: “Given that £11.56 billion (nearly EUR 10 billion) of taxpayers’ money will now be given to farmers through the single farm payment up to 2020, it would be entirely appropriate to at least ask whether they should pick up the bill for any pollution they cause.”

For their part, the NFU (National Farmers Union) as part of a business-as-usual group in the UK, lobbied hard for anything less than 15% modulation. They are “delighted” with 12% modulation, and “pleased” Patterson “listened to the industry”

Biodiversity under our feet: life depends on it