Hundreds of UK dairy farms descended on milk processing facilities in Somerset, Leicestershire and Yorkshire during Wednesday night and Thursday morning. Blocking deliveries to the Wiseman Bridgewater plant and Arla sites in Ashby-de-la-Zouch and Leeds, the serried ranks of tractors had the breakfast TV camera crews out to cover the story. 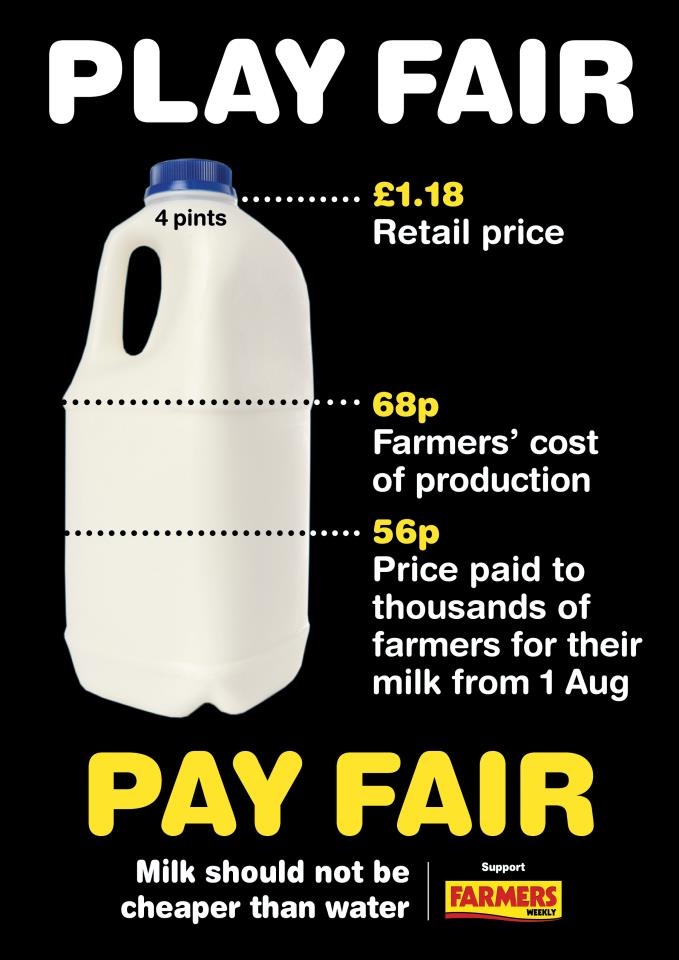 A West Midlands dairy farmer told an ITV film crew that his business was likely to lose GBP 60000 of the next year (not GBP 16000 as later headlined on the ITV website). Speaking during the blockade of an Arla processing plant, he explained to viewers that as well as being locked into long term contracts, farmers are: “…dictated a price that we can earn for milk.”

Speaking to another ITV camera crew from his Pembrokeshire yard, Farmers For Action leader David Handley told ITV : “All the sitting down and talking is falling on deaf ears…” Asked whether it wasn’t dairy farmers’ turn to share some of the misfortunes in the economy, he replied: “We’ve been taking a hit for the last eight or nine years, but we’re now being asked to produce milk at 4-5 pence [per litre] below the cost of producing it.”

The agenda is not to make milk expensive in supermarkets, though. “We’re family people and consumers, as well, but we are not asking the consumer to pay any more. The figures you read out earlier show that the industry is a supply chain and that supply chain could offer fair trade.That means we all get a fair share of the pot, if you’d like to say it like that. And that’s what we’re asking for, not for the consumer to pay a single penny more for milk.”

Back in the studio, shadow environment secretary Mary Creagh told viewers that dairy contracts across the board need to be reviewed: “…we need to get these contracts working, make them fairer.”

There are gaps in awareness at all levels, though. One of the bemused TV presenters ventured: “Can you do that in a free economy? Can the government just step in?”

“Well it’s not exactly an open economy,” Creagh retorted, before dragging Single Farm Payments (annual lump sum payments to cover fixed costs) into a discussion of operating margins and running costs. For a senior opposition figure to mix up the issue is symptomatic of a widespread poor grasp of the dairy producers’ predicament.

The ITV report cited DEFRA data that put the retail price of a litre of supermarket milk at 85p/litre. Of this the producer would see 25p/litre as a farmgate price for milk costing around 30p/litre to produce. No mention was made of the fact that fat contents are standardised and that after retail milk has been shipped out, there is still bulk cream to sell to a different set of industrial buyers.

The processors’ problem is that they have allowed bulk cream earnings to prop up their retail liquid milk business and given way to retail demand for every greater margins. Figures from the Institute of Grocery Distribution (IGD) were quoted at last week’s dairy summit to the effect that retail margins on liquid milk had risen from 2.5p/litre in the 1990s to around 15p/litre.

If retail margins can rise by a factor of six in the space of a decade, then it should not be too hard to guess who is pocketing the lion’s share of the 65p/litre difference between farmgate and supermarket shelf. If processors want to recover their haulage and packaging costs on white milk, they have a shared interest in cost-plus retailer contracts, the same as dairy farmers.