It would cost UK farmers £1.8 billion to hand pollinate crops if there were no bees to do the job for them – assuming that such a huge task could be carried out. This is what University of Reading researchers discovered when they started to calculate some of the potential problems of declining UK bee numbers. 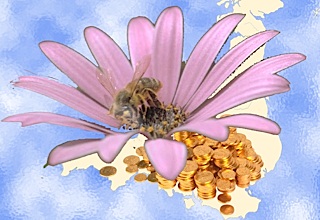 The National Audit Office estimated the value of honeybees to British economy at £200 million a year in 2007. Bees pollinate food crops that have a retail value of nearly one billion pounds in the UK.

Friends Of the Earth (FOE) this week launched a campaign in the UK to halt the decline in bee numbers. Over the past 20 years, bee populations have declined by more than half. There are proportionately fewer solitary bees, too, over a similar period.

Hand pollenation became the norm for Chinese farmers in the Hanyuan area of Sichuan during the mid-1980s. According to researchers at Sichuan University in 2001, about quarter of a million pear trees are hand-pollenated by local peasants over an area of 16,700 hectares after heavy pesticide treatments wiped out the local bees. At the time of the study, the pears were a cash crop in this region, grown initially along the retaining walls of paddy fields and later in dry orchards.

The high density and relative accessibility of carefully managed pear trees means that experienced people might do 30-40 trees in a day during the two-day pollenation window. However, this is neither comparable nor transferable to a more diverse group of cultures: humans are, at best, poorly adapted for doing what bees would do naturally, given the right conditions.

Bee-killing neonicotinoid seed dressings on winter-sown cereals deliver just 2% of their active ingredients to plant tissue. What happens to the other 98%? […]

Conferences highly influenced by the agro-chemical industry down-playing the impact of agricultural practices on bees. […]