In July, a market study was performed in three different local food markets in Cluj-Napoca, Romania. A Master’s Thesis in collaboration with Eco Ruralis, the main purpose of the project was to collect producers’ opinions of traditional seeds, evaluate the use of these seeds and also the economic impact of selling food produced from them. What did it find?

In total, 40 producers were interviewed at two public markets (IRA – daily; Gheorgheni – weekly) and one private market (Marasti – daily). They comprised mostly of small-scale peasant farmers who own an average of 2.3 hectares of land, selling local food as they live within 44km of the market. 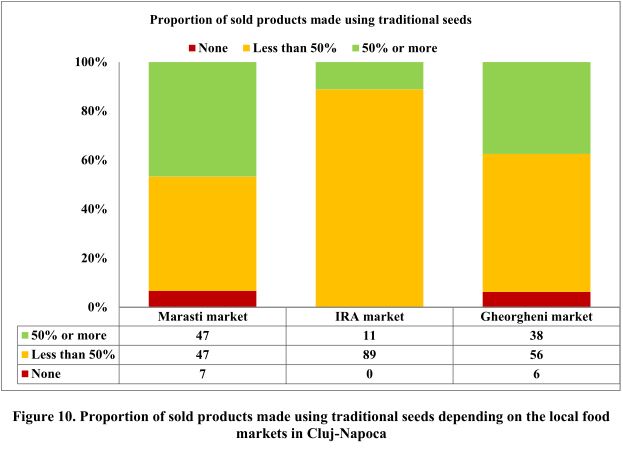 However, 95% of these producers declared that they were using traditional seeds to some degree. This result was very surprising because many varieties have disappeared in recent decades. Among the perceived benefits, farmers emphasized social, agronomic and socio-economic benefits. Many of the farmers see using these seeds as a cultural tradition that they want to continue. Though technically disallowed, a few producers even sell small quantities of traditional seeds because there is demand for them. From raw vegetables and canned goods in jars, there was a strong presence of products made using traditional seeds in the local food markets studied.

The study also attempted to understand farmers’ difficulties in accessing markets and sustain themselves economically by selling locally at these markets. 55% of the producers declared that they do not encounter any problem to sell their products in the markets, while 45% of the pointed out some specific issues. 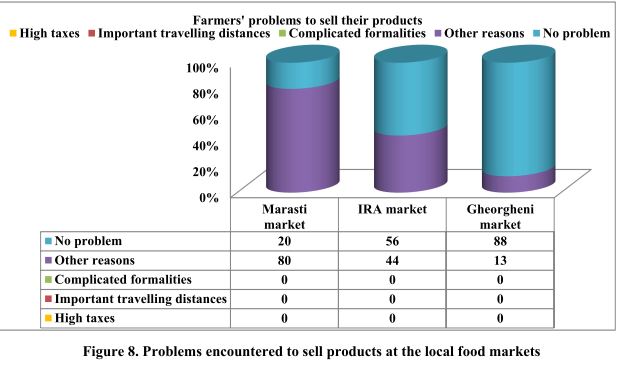 Market Law 145, which has been applied since May 2015, was the main problem area. Many farmers bring up this new law as a “disaster because of the mandatory notebook and attestation”. In the words of the farmers, the notebook is “topsy-turvy” and “too complicated”. Bizarrely, depending on the city hall they are affiliated with, the prices of these two mandatory documents varies greatly.

Also, many producers complained that there were not enough customers or that they are simply “not interested anymore in buying quality products, but rather in buying cheap and in big quantity”. Moreover, other farmers complained about the “high taxes and complicated procedures” in order to obtain access to the food markets.

Finally, a major problem referred to is the “presence of intermediaries” whom are re-sellers (not producers) in the markets. These people offer cheaper prices for imported products and steal the customers of the actual food producers who sell there. Partners of Eco Ruralis have done similar investigations and what seems true is that the results of this study is representative of many city markets around the country.

The message then is mixed from local food markets. On the one hand, peasant producers are still using traditional seeds and try to sell high quality products to local consumers. But on the other hand, the Romanian Government doesn’t seem to support their efforts as it can be seen with this new Market Law 145. How can we deal with this situation? One solution could be to promote food sellers based on special designations which can be displayed on each table of a market: those who are actually the producers of the food; those who produce food locally; those who produce food using traditional seeds, etc. These can help inform the consumer and encourage them to buy superior products for affordable prices. This would increase the economic viability of food sold by producers which were made with traditional seeds.

Eco Ruralis will keep working with the local City Hall which permitted this market study. It will do this in order to increase local producers’ access to traditional seeds and to improve their knowledge about local food market regulations.

Finally its worth noting that some of the producers were so nice that they even invited us to their homes to see their farms – this is also a part of the rural culture, one that these markets represent and enable.

A critical new book released today (24th September) by United Nations’ World Agriculture Report (IAASTD) members calls for an accelerated transformation of our food systems. The authors, including ARC2020’s Benny Haerlin, point to the need for a paradigm shift in the perception of the global food system, incorporating agroecology. Here we feature an op-ed by Katharine Earley.   […]

The business-as-usual global warming ‘lukewarmist’ is no longer at the DEFRA helm. via Peter Crosskey. […]