All the beautiful ideas are like the natural seeds – if they find a fertile ground will grow and blossom and give flowers and fruits. Imagine that when we mix beautiful ideas from inspirational people from diverse (back)grounds and actual natural seeds. The result cannot but only thrive and travel in the name of the  International Solidarity Caravan for Seeds. 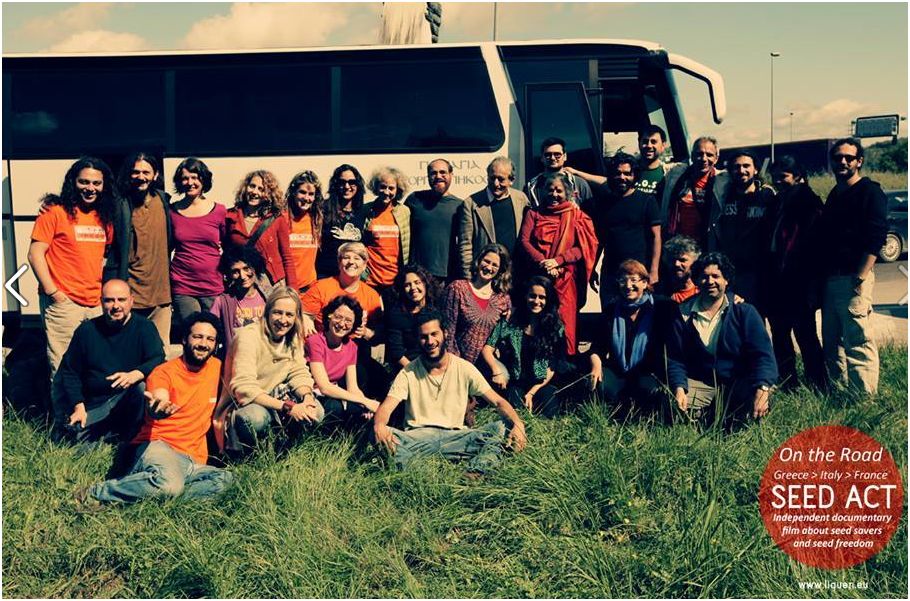 This is a project conceived by the international movement for the Freedom of Seeds and Indian Navdanya Movement (India), and embraced by the seed exchange community of Peliti (Greece) and the French Seed Association of Kokopelli (France).

The Seed Caravan actually traveled between April 26th and May 4th from Greece, then Italy and final stop to France carrying happy seeds and people (39 in total) from six countries (Greece, Bulgaria, Portugal, Germany, Italy and India) to bring to the attention of Europe the voices of those who want their agriculture to be free of poisons and GMOs and in favour of local seeds and biodiversity.

Nearly every stop and a seed celebration festival!  Exchange and sharing of knowledge, experiences, seeds and songs.  The Caravan set out from North of Greece, from the biggest annual free local seed exchange festival organised by Peliti where 3000 people attended this year.  The first stop was the “Karatasiou” former  military camp in Thessaloniki, which has been occupied by citizens’ groups for purposes of urban agriculture (PER.KA).

With the victory of the rejection of the EU draft seed law by the EU Parliament still fresh in the memory, Peliti sets the tone of the journey: “When a European farmer loses the ability to hold, improve, exchange, and sell seeds, all farmers of the world are losing their freedom. Consumers lose their freedom to choose healthy and safe food. Democracy itself is threatened. When in the EU are enacted and implemented such laws, the freedom and democracy of all nations of the world are threatened . The entire history of agriculture is erased- and our food sovereignty is at risk . The problems faced by farmers in Greece are the same faced by farmers in Guatemala , France, India,  Australia, etc. We resist this oppression celebrating the abundance and fertility that gives us the Mother Earth through traditional seeds” 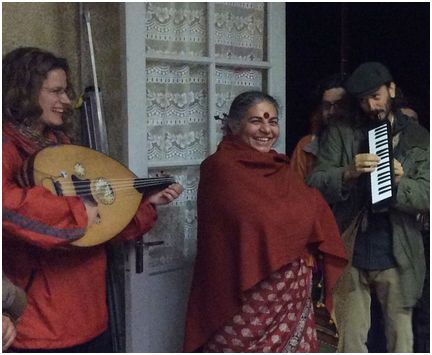 In Italy, the Caravan did two stops one in Florence where met Dr. Vandana Shiva in the Seed, Food and Earth Democracy Festival and the second one in Genoa, to participate in events organized by Terra, an association claiming public land for young farmers. On its way to Kokopelli’s  International Seed Festival, the Caravan were received by the self-sufficient  Longo Mai eco-community, which cultivates and processes its own agricultural produce.

The International Seed Days at Kokopelli , gathered organizations from France, Greece, India , Chile, Brazil, Madagascar, Colombia, Italy, the Netherlands, Portugal , etc. The discussions  between seed saver  organizations  culminated in the creation of an ALLIANCE FOR SEED FREEDOM, which will process and implement joint actions.  More than 600 people attended Vandana Shiva’s talk despite the heavy rain.

The Florence seed festival declaration conveys the vision of the seed savers organizations that participated in this project.  “We are here to sow the seeds of the future and sow the seeds of another vision for the planet and its inhabitants. The Caravan and the Seed Festival are reclaiming the commons of the seed, the land and our cultural heritage. The industrial agricultural model has brought us to a severe crisis where land is degraded, biodiversity is destroyed and farmers are being uprooted from their livelihoods and culture and where seed is being privatized, destroyed, patented and enclosed. The old economy, based on privatizing the commons of the seed and our knowledge, has resulted in an ecological crisis on one hand and a deep economic crisis on the other. […] This imbalanced economic model has created huge unemployment and the young have no jobs.

This model allows the appropriation of public goods and public assets and is destroying not just the land, but family farming and opportunities for the youth. To the greed of financial institutions, the appropriation of our lands and of the commons should not be allowed. […] We commit ourselves to defending the biodiversity and freedom of the seed to be shared and considered as a commons.”

see more on the importance of Seeds on Arc2020 brief

As the debate around genetically-modified “super crops” heats up, tried-and-tested solutions to tackling the climate crisis are in danger of being left out in the cold. Any deregulation of new GMOs threatens to undermine diverse and self-determined approaches to seed and food production that enhance biodiversity and soil health, and strengthen the resilience of entire agro-ecosystems, argues Stefanie Hundsdorfer. […]