Ireland’s Maynooth University hosted the 2018 Festival of Food Sovereignty mid-April. The intention was to connect activists, scholars, practitioners and social movements from around the world interested in creating a food system rooted in principles of justice, ethical production and consumption, sustainability and democracy. ‘Keynote listener,’ Anja Murray, dishes up her word harvest of conclusions. 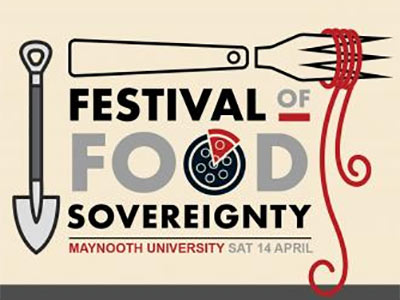 How can I begin reporting on the concepts and outcomes of a festival with such a rich programme? There were talks and workshops on the practical skills of beekeeping and seed saving; artistic explorations of food supply systems; cooperative approaches to food consumption; and stories from small producers from around the world.

Noticing many interrelated themes, I began a ‘word harvest,’ by jotting down words that kept popping up through the day. Each discussion was weaving together different layers and stages of our food system and I began noticing patterns.

As a scientist, I have a tendency to categorise.  I put circles around the words related to the basic resources provided by nature: land, soil, seeds, roots, fertility, water, minerals, carbon. These are the natural building blocks upon which we survive and thrive.

Lest this be forgotten, a biodiversity walk around the campus allowed native trees and plants, wild bees and butterflies, birds and other wildlife to participate in the proceedings!  A workshop on seed saving was hosted by the Irish Seed Savers Association, which discussed the challenge of how 95% of vegetable seeds in Ireland are imported and how crucial seed sovereignty is in protecting genuine food security.

The next category to emerge from my word harvest was the human structures.  To maximise what we reap, we humans exploit, manipulate and engineer ways to acquire bigger yields.  We bend natural processes to our service and we develop systems to live collectively and produce plentiful and secure food.

Each of the talks and workshops in some way cast an insight to these operational systems. They highlighted challenges and alternatives, exploring approaches to food production and distribution that meet the needs of the many, the needs of nature, and the needs of equitable living, rather than the needs of corporate growth.   The many failures of the prevalent corporate food regime were largely absent from the days discussions, a feature that was distinctly refreshing.  Instead, the focus was entirely on the multitude of solutions and positive alternatives that exist.

A presentation on the relevance of Marx’s ‘metabolic rift’ to Ireland’s colonial past brought about stimulating discussions about how our agricultural systems deplete the soil. Poor soil produces nutrient deficient food and results in poor health for the people.  The solution is to focus on the soil rather than the ‘product’, with soil being the crucial stage of intervention.  Approaches to repair the rift include urban agriculture, land sharing, allotments and community gardens, where intensive cultivation ensures that what is taken from the soil is returned to it.  To complete the metabolic cycle is to recycle our waste back in to production, from growth to decay, decay to growth.

One talk was on agroforestry in Guatemala, where multi-storey agroecology systems that mimic nature are giving higher income returns than on equivalent semi-conventional farms.  Such systems are all the more relevant when we bear in mind that 70% of the world’s food comes from small farms.   We also heard from an Irish edible landscape project in which the community have come together to grow fruit and nut trees, shrubs, root and leaf vegetables, wild herbs and mushrooms along the Great Western Greenway in Co Mayo, on Ireland’s Atlantic coast.

There were several recurring words concerning the values encompassed in the concept of food sovereignty and these words made up my next word harvest category. They included knowledge, respect, listening, and sharing and the crucial role of group dynamics and participative decision making.  Each of these values were woven through the examples that we heard about during the day and I suspect it is these values that constitute the ingredients of success for each project presented and discussed.

A fascinating session on the art of food sovereignty highlighted how we, as a society, have become so disconnected from food production that we need art to examine and re-imagine our food production systems.  ‘A Field of Wheat’ was one of the projects presented, where a group of 42 people, selected for a diversity of skills and perspectives, came together to grow a field of wheat as a collective.  This was an artistically driven endeavour to examine the inputs and decisions involved in simply growing a field of conventional wheat.

Artist Jeanne van Heeswijk spoke about the rebirth of a bakery in Anfield, where a community bakery became a hub for resistance to official plans to clear and demolish the neighbourhood.   With nowhere else in the community to buy food, interact with each other and engage in discussion and debate, ‘Homebaked’ has given residents the opportunity to rethink the future of their neighbourhood. This was another inspiring example of the many small ways to build resistance through positive action, from the ground up.

Through the presentations in this session and the discussions that they prompted, I realised that we can look to artists to scrutinise, challenge, and sow the seeds needed for the urban majority to rekindle the connections with soil, food and sovereignty.  It is they who can engage in ways that policy makers and scientists cannot, it is they who can communicate the redemption narrative that is necessary for the required cultural shifts.

Gratitude must go to Dr Alistair Fraser and the whole team at Maynooth University who organised this ground-breaking event.  I hope that the many seeds of knowledge that were shared and planted through the whole process will now germinate and thrive! 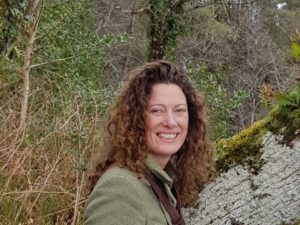 Anja Murray is an independent ecologist with a background in environmental science.  She is involved in research, policy and advocacy relating to nature conservation, forestry, European and national agricultural policy; peatland conservation, water quality, natural flood management and other areas where improvements are needed in how we manage our natural environment.  Anja presents the environmental television programme ‘Eco Eye’ on Ireland’s national channel and has her own small weekly radio series, called ‘Nature File’, on the national broadcaster Lyric FM.

About Anja Murray 1 Article
Anja Murray is an independent ecologist with a background in environmental science. She is involved in research, policy and advocacy relating to nature conservation, forestry, European and national agricultural policy; peatland conservation, water quality, natural flood management and other areas where improvements are needed in how we manage our natural environment. Anja presents the environmental television programme ‘Eco Eye’ on Ireland’s national channel and has her own small weekly radio series, called ‘Nature File’, on the national broadcaster Lyric FM.

In the first of a two-part special on the soil-to-soil textiles movement, Ursula Billington unravels the disconnect with where our clothes come from, and spotlights some of the women working to pull the wool from our eyes. […]