A report from Friends of the Earth Europe points to serious concerns for EU farming and food due to the ongoing – and now under severe pressure  TTIP talks. 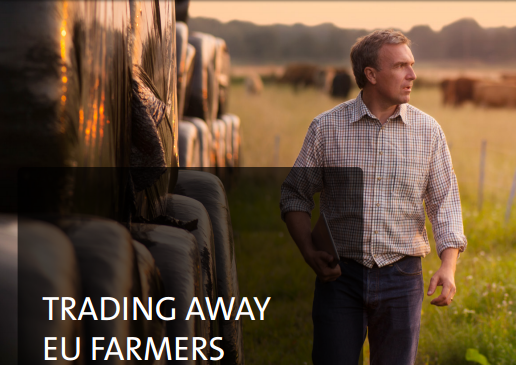 TTIP the Transatlantic Trade and Investment Partnership could impact  EU agriculture severely, with much pain and little gain Trading Away EU Farmers  finds. In essence, the from Friends of the Earth Europe report exposes how agri-food may be traded off for other sectors more core to the EU economy.

Above: Irish Farmer Organisation the ICSA – Irish Cattle and Sheep Association – protest TTIP and Mercosur on May 4th. Video by Paula Geraghty for Ruptly.

Suckler beef is cited as especially vulnerable to lower prices and lower standards from US imports, while negative impacts are also predicted for rural areas and consumer interests.

For Ireland, research by the IFA, the ICMSA, ICOS and the Copenhagen Economics report – commissioned by the Department of Jobs enterprise and Innovation – complements these models.

For beef, the report states that “the EU is likely to offer a larger import quota to the US, rather than eliminate tariffs altogether, but this would still have severe impacts on suckler beef production.” Ireland is listed as having the EU’s largest suckler beef herd, with beef central to the Irish economy in general.

However “if US beef exports to the EU market are centred predominantly around high-value cuts, the results presented here may underestimate the…contraction  in output”

For dairy, “taken together, the various models suggest that the TTIP could lead to lower prices for dairy farmers” the report finds. The ICMSA are quoted as saying “[i]f all of this reduction in value added is absorbed by farmers, which is likely to be the case, farmers’ incomes would actually decrease despite the increase in exports to the  US under TTIP.”

An emerging concern noted in the report is that dairy may be traded off against a special category of products called GIs, or Geographical Indicators. These are traditional, regionally specific products. In practice, most come from France, Italy and the UK, while the largest of these are very large and powerful in their respective industries, including champagne, cognac, scotch whisky and many iconic cheeses such as parmesan and feta. ICOS are quoted as saying in 2015 “the fear for us… is that the EU team will sacrifice our interests in getting rid of tariffs and other barriers to trade for Irish product in return for a deal with these GI cheeses.”

Ireland has very few GIs and has listed none whatsoever for protection in the Canadian trade deal – CETA – which is seen as a precursor for TITP.

Arable crops fare poorly too. According to an EU modelling report from 2014,  predicted change in cereals value added output will be -4.2% for Ireland, but  +1.3% for the US. Of 10 EU Member States or regions listed, only Spain and Portugal performed worse than Ireland. This European Parliament report predicts that eliminating tariffs and reducing non-tariff measures will also lead to a fall in arable oilseed  crops of -2.4% for Ireland.

Though the modelling is considered weaker for pork and poultry, a fall of 2.7% in white meat output in Ireland, under conditions of full tariff removal and 25% reduction in non tariff measures, is revealed.

Concern is expressed in the report that even if EU agri-food standards are maintained, “increased imports from the US will still flood European markets, ensuring huge export opportunities and profits for food corporations and US factory farms at the expense of European farmers.”

Average farm size in the US is many times that of the EU, as the European Commission note:

Lead by Ireland and France, 20 EU agriculture ministers have now expressed concern about the current trade deals the EU is negotiating – TTIP, the Mercosur agreement and the on-going Canadian trade deal (CETA). The European Commission is to conduct an impact assessment, due in September.

Friends of the Earth Ireland’s Chairperson, Dr. Cara Augustenborg, pointed out that there is a dire need for an EU impact assessment of TTIP: “Member States led by Ireland and France have been pushing for the EU to conduct an impact assessment of TTIP on European agriculture. The Friends of the Earth Europe report is the first to examine that impact based on available models. The report confirms that TTIP will lower the value of most Irish agricultural products, particularly beef, because our farming systems cannot compete on price with the intensive, environmentally-damaging, factory-farming systems of the United States.”

She added: “Irish farmers and consumers should be very concerned about TTIP …US government and producer organisations are openly calling for the EU to weaken protection in areas such as the approval of GM foods, pesticide safety rules, and the bans on hormones and pathogen washes in meat production. The quality of our food is superior to US products with respect to EU food production and safety standards. It’s critical to protect those standards and our agricultural enterprises from the potential damage that TTIP could inflict.”

A version of this story first appeared in the Irish Examiner newspaper.

All ARC2020 news and features on TTIP

As EU Trade Commissioner Cecile Malmstrom visited Ireland last Friday, The Irish Farmers Association (IFA), Ireland’s largest farming organisation, has expressed serious concerns about the transatlantic trade and investment partnership, TTIP. The organisation made reference to newly published Copenhagen Economics report, commissioned by the Irish government, which identifies, in the words of IFA President Eddie Downey “very negative impacts for Ireland’s vital beef sector”. According to the IFA “following a meeting yesterday with the authors of the report, both Copenhagen Economics and officials from the Department of Enterprise Trade and Employment accepted that TTIP presented very significant risks to both our beef and white meats sector.” Beef is the largest agri-food sector in Ireland, employing over 70,000. The Copenhagen Economics report was commissioned to assess the potential impacts of TTIP on Ireland. While positive on potential jobs growth, citing up to 10,000 new jobs for Ireland, it also predicts that the Irish beef sector will be badly hit by TTIP. The IFA’s new position paper on TTIP says “as a fundamental principle, EU negotiators must insist on equivalence of standards. […]

The 7th Round, beginning this week, includes Food Safety and Animal Welfare. […]

European negotiators have struck a clumsy compromise to protect about one in 10 of the EU’s Geographical Indicators (GIs) during transatlantic trade talks with the Canadians. Protected geographical terms have long been a bone of contention on the other side of the Atlantic, as ARC2020 reported earlier in its TTIP coverage. Classified by some as a technical barrier to trade, the EU’s extensive register of geographical indications (GIs) has often been held up as an example of unfair practice by traders up and down north America. On February 29, the European Commission released a summary of the final text of the Comprehensive European Trade Agreement with Canada (CETA), which is widely regarded as a TTIP testbed. Had the details been in the public domain earlier in the negotiating process they would have sparked howls of protest: the current document, however, represents a fait accompli with a sting in the tail. There are over 1,400 EU geographical indications, many of them wines and spirits that were bundled into the existing EU-Canada Wines and Spirits Agreement, which […]