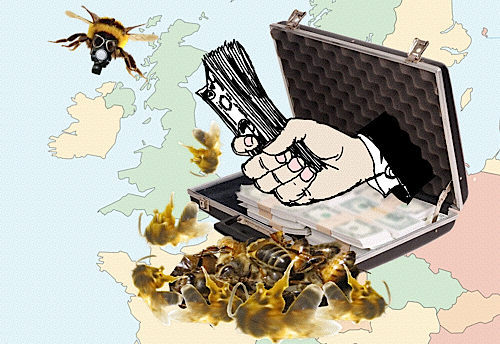 Parliamentarians in the UK have expressed their concern over the government’s willingness to rely on industry-funded research into bee-killing neonicotinoid pesticides. Towards the end of July, the Environmental Audit Committee (EAC) reported on the National Pollinator Strategy. The MPs warned: “Less welcome is Defra’s reliance on industry to fund critically important research. It is symptomatic of Defra’s loss of capacity to deliver its environmental protection obligations and might result in greater susceptibility to commercial, rather than scientific, research priorities. That becomes a particular weakness where the industry-funded research is intended to contribute to a review of the ban on neonicotinoids.”

Friends of the Earth bee campaigner Paul de Zylva told ARC2020 that DEFRA was drifting like a rudderless ship when faced with some very basic issues. He believes that at some level a decision has been taken not to repeat last year’s FERA field trial fiasco. This particularly poor study was so badly flawed that even EFSA rejected it. While welcoming DEFRA’s chastened wisdom in not wanting to repeat the experience, de Zylva explained: “This decision retrofits its position in the draft NPS (action 10) that further testing should be carried out by pesticide companies ‘and others’.” At intervals during the development of the National Pollinator Strategy he asked DEFRA for their position on research, as well as how it should be funded and managed, but failed to get any conclusive answers.

De Zylva argues that the “post-rationalisation” for the acceptance of industry-funded research reflects a number of concerns: the likely cost during a time of recession and austerity; the use of public money for private gain and whether a national government should be the final regulator. The UK government has never been shy of using public money for private gain in the past, but it now appears to have dumped the notion of a duty of care towards its citizens, environment and territory. While estimated research time requirements range from three to five years, the persistence of neonicotinoids in the soil point to an increasingly urgent need to stop adding to the existing levels.

Giving evidence to the Environmental Audit Committee, Dr David Goulson warned that: “…we have been analysing samples of pollen and nectar collected from wildflowers growing in field margins and a very large number of them are contaminated with a whole mixture of neonicotinoids at concentrations only a little lower than that found in the crop, nectar and pollen, which means that bee nests in the real world are being exposed throughout the year to a cocktail of neonicotinoids right from early spring … through to the summer.” Source.

This is followed by a degree of equivocating, since: “…serious environmental threats must be tackled, even if this carries costs.” However, by implying that protecting pollinators is somehow a potential burden to the monetary economy, the government suddenly pulls a toxic rabbit out the hat by concluding that: “It would evidently be right to tackle even a remote risk of serious environmental damage if this action carried no cost. It would not be right to tackle the same remote risk if the action needed would cripple the economy.”

ARC2020 contacted DEFRA to learn more of this novel twist. Although it would cost “quite a lot of money” to carry out all the necessary research, DEFRA confirmed to ARC2020 that it is currently carrying out further research of its own on pollinators and that industry-funded research is being arranged to prepare answers for the European Commission review of the neonicotinoid ban in 2015. There is no need to worry, the DEFRA press officer declared earnestly, “…we’ve asked for [the research] to be made transparent.” Given that there is only time for desk research from published sources between now and the European Commission neonicotinoids review, transparency is hardly the issue.

Can the UK expect to see a whole slew of environmental issues subjected to triage by bean counters, just in case there is no budget for a crisis?

Nobody knows what happens to 95% of the neonics used in seed dressings.

DEFRA promoted the National Pollinator Strategy with a single tweet. Blink and you’d have missed it…

London: The March of the Beekeepers

Eurostat publishes the figures on the EU farm production