Wheat yields in the UK have not been rising for nearly 20 years, according to a study by HGCA, the cereals and oilseeds division of the Agriculture and Horticulture Development Board (AHDB). Researchers highlighted basic crop management shortcomings, such as a generalised failure over the past 30 years to increase the nitrogen applications required by modern winter wheat and oilseed rape varieties for maximum yields. The study also found ongoing sulphur deficiencies in soils growing these crops. 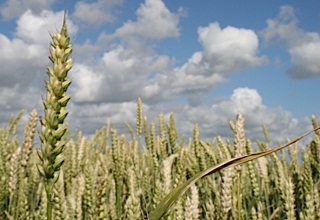 The use of heavier machinery and a failure to maintain drainage systems in places, combined with the “…continued long-term decline in soil organic matter…” were also cited as factors in the “yield plateau”. None of these trends, however, prevented HGCA, a statutory body, from criticising current European environmental legislation, which it claims: “…is likely to present considerable obstacles to increasing yields.”

There is the observation that changes to agronomy have been limited, “…with growers aiming to maximise profit not yield.” While “…no single factor has had a dominant influence on yield trends,” HGCA urges “…a more holistic approach to agronomy.”

Given the underlying failure to reach the genetic potential of existing crop varieties, UK campaign group GMFreeze is warning that: “…a few additional GM traits will not automatically lead to a yield increase.” On HGCA’s own findings, most of the potential yield increases that could be attributed to conventional genetic developments have gone unrealised in recent years for lack of simple management measures and challenging growing conditions.

GMFreeze points to a need for greater planting diversity, which can help to counter plant disease and produce acceptable yields. It argues that the HGCA study supports the case that plant breeding and monocultures face “…biological, chemical and physical constraints,” warning that GM crops could make some existing problems worse.

Lincolnshire arable farmer Peter Lundgren commented: “Farmers cannot control the weather. To mitigate the extremes of the weather we are experiencing we must concentrate on getting the soil and agronomy right in order to give crops the best chance.”

“GM crops will not increase yields in the UK. The introduction of GM herbicide tolerant crops would encourage short rotations and minimum tillage, which the HGCA says are already holding back yields – and that’s before GM’s potential to increase the incidence of herbicide resistance. We need to look very hard at our use of heavy machinery and prevent deep soil compaction. GM crops do nothing to address these very basic problems.”

“The UK’s research institutions need to think again about their priorities and drop GM research in favour of whole farm systems research. They need to do it quickly so farmers can be informed of best practice.”

There is still time to sign the GMFreeze “Say NO to GM wheat” petition: go to http://www.gmfreeze.org/actions/24/ Add your name to the list and tell DEFRA that you oppose any planting of GM wheat in the UK.

As has been the case with the UK’s new post-Brexit referendum Ministers, the now head of farming, food, rural affairs and environment has made some unusual utterances in the recent past. Peter Crosskey let’s us get to know Andrea Leadsom a little better. […]

After the Brexit bombshell, ARC2020’s Peter Crosskey tells us how the UK farming community is reacting to vote to leave Europe. […]